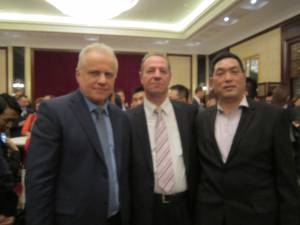 The seventeenth of January in Kiev on the occasion of the 25th anniversary of the establishment of diplomatic relations between the People's Republic of China and Ukraine and the traditional Chinese New Year – the Spring Festival, was held an official reception of the Ambassador of China to Ukraine Mr. Du Wei. From Zaporizhzhya National University the reception was attended by the Rector, Professor Mykola Frolov and the Vice-Rector for Educational Research, Professor Volodymyr Volkov.

In his speech the Ambassador Extraordinary and Plenipotentiary of China to Ukraine Mr. Du Wei stressed that during the development of Ukrainian-Chinese cooperation our country has grown from the relationship to the strategic partnership.
Among the guests of the reception there was also the Vice Prime Minister of Ukraine Stepan Kubiv. He presented to the Ambassador a gift variant of Collection of materials about Ukrainian-Chinese relations on the occasion of their 25th anniversary. 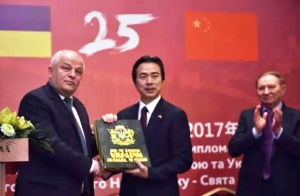 Also, the reception was attended by the second President of Ukraine Leonid Kuchma, who stood at the origins of the intensification of the development of relations between China and Ukraine, and other famous Ukrainian personalities.
It should be noted that the cooperation of Zaporizhzhya National University with the People's Republic of China is fruitful and promising. During last year's visit of the delegation of Anhui Pedagogical University (China) to our University the partners reached agreements with the administration of ZNU on the opening of the Confucius Institute on its basis.
Then, the Ukrainian and Chinese universities signed a cooperation agreement, which, in addition to opening of the Confucius Institute, also involves the development of mutually beneficial joint projects in the fields of education and science.
In addition, the agreement refers to the joint researches, academic exchanges of students and teachers, double degree program and the organization of joint scientific and educational activities.