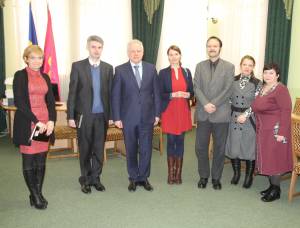 Today, January 24, Zaporizhzhya National University was visited by the representatives of the Embassy of the Czech Republic: Minister Counsellor David Mašek and Director of the Czech Center in Kyiv Lucie Řehoříková. They discussed with the Rector of ZNU, Professor Mykola Frolov the prospects of cooperation in the field of science and education, in particular, the possibility of conducting Czech language courses and the setting up of the specialty "Czech language and literature". 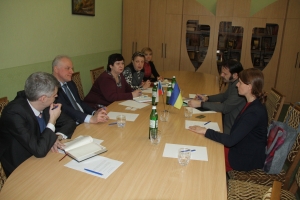 The guests noted that they were in Zaporizhzhya for the first time. Consequently, the Rector briefly told them about the University. Mykola Frolov stressed that the University was the largest in the region. Special attention was paid to the Faculty of Philology, its history, development of such specialties as Polish and Bulgarian Translations and a desire to continue to develop a series of the Slavic languages.
In addition, the Rector drew the guests’ attention to the fact that ZNU had signed 67 agreements with the foreign universities. Just last year about 180 teachers and students undertook an international internship. Some of them are abroad conducting their researches during long-term internship. There are double degree programmes with several universities. Also, there are foreign teachers at University – native speakers from Bulgaria, France, Germany, the United States, the United Kingdom and other countries. 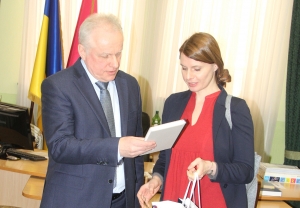 During the discussion of the joint Ukrainian-Czech projects, the parties reached agreements on the opening of Czech courses at Zaporizhzhya National University in the spring for all those wishing to learn the language. Besides, starting from the new academic year – September 1 – the facultative studies of Czech will begin at the Faculty of Philology with the prospect of teaching of several native speakers who will work at Zaporizhzhya National University. In the future the specialty "Czech language and literature" will probably be opened at the Faculty of Philology.
According to the Minister Counsellor of the Embassy of the Czech Republic David Mašek and the Director of the Czech Center in Kyiv Lucie Řehoříková, their main purpose was the cooperation in the field of education. The guests also noted that they would continue to support the initiatives of the representatives of Zaporizhzhya National University for an internship in the Czech Republic, academic exchanges, etc. 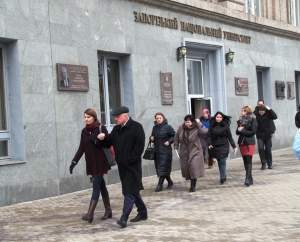 For example, in 2015, the fifth-year student of the Faculty of Economics, specialty "International Economics" Kostyantyn Merkulov took part in the half-yearly internship in the Czech Republic. He obtained a scholarship to study abroad in the framework of the international project "HUMERIA" of the program "ERASMUS MUNDUS", which is implemented in ZNU and is coordinated by the International Office of ZNU.
At the end of the meeting, the participants discussed the organizational details of the projects implementation, as well as outlined the prospects of the opening of the Czech Center in Zaporizhzhya on the basis of ZNU. Finally, the Rector Mykola Frolov gave them a tour of the campus.
Photo gallery: https://www.facebook.com/pg/univerzp/photos/?tab=album&album_id=1488848574477864