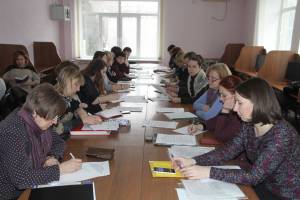 Yesterday, January 24, in Zaporizhzhya National University was held a regular session of the Scientific and Methodological Council under the chairmanship of the Vice-Rector for Educational Research and Academic Affairs, Professor Oleksandr Hura. The participants discussed the prospects of further development of the Concept of foreign languages learning, the introduction of the CLIL methodology for teaching academic subjects at the Faculty of Foreign Languages and the organization of sports clubs for students as part of a healthy lifestyle. 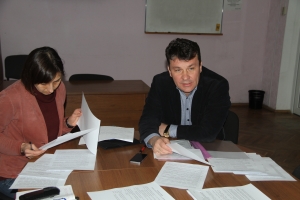 The Associate Professors of the Department of Theory and Practice of Translation from English Oleksandra Holovko and Svitlana Zapol'skykh gave talk at the beginning of the event. They introduced the proposal for the implementation of CLIL methodology in the educational process at the Faculty of Foreign Languages. The speakers recalled that last year the representatives of ZNU visited the Narva College of the University of Tartu. This visit took place within the framework of the project "Introducing of the multilingual education model and the methodology of simultaneous teaching of subject and language (CLIL) in Zaporizhzhya National University and Zaporizhzhya region". This year in May in order to provide another important phase of the project in the University will be held an international scientific-practical conference dedicated to this important issue.
Besides, in the future it is planned to extend CLIL methodology at other, non-linguistic faculties of the University. The members of the Scientific and Methodological Council unanimously supported this initiative. 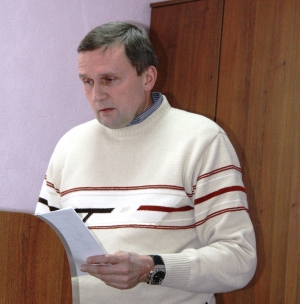 The presentation of the Head of the Department of Foreign Languages of Professional Direction Stanislav Ivanenko devoted to the ways of improvement of the Concept of foreign languages learning at ZNU aroused great interest among those present. So, Stanislav Ivanenko noted that today the students studied English during four years of bachelor degree course. According to the results of study at the University they have to speak a foreign language at the B2 level.
The speaker also pointed out that during four years trained ZNU teachers were trained in the foreign language courses free of charge. As a result, there is already a positive experience of cooperation between the Faculty of Foreign Languages and other faculties in this direction. So, the representatives of the Faculty of Law are now preparing to print the dictionary, where the legal terms are translated in English, French and Spanish.
Among the main problems that were considered at the meeting there were different levels of foreign language proficiency of the applicants to the first year. It can be solved through the creation of additional language courses for those who have to pay more attention to the improvement of their foreign language. Thereby, Oleksandr Hura suggested introducing the exams at the end of each course to receive the international language certificate. Another important point discussed during the meeting of the Scientific and Methodological Council was the organization of sports clubs for students’ physical self-improvement. 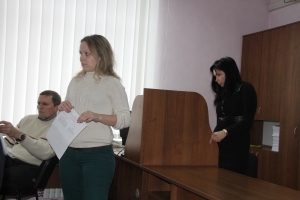 In addition, there were discussed the issues regarding the results of the work of the project teams of the faculties for the development of project programmes, as well as the formation of curriculum for masters degree 2017.