ZNU visited by the Chinese delegation 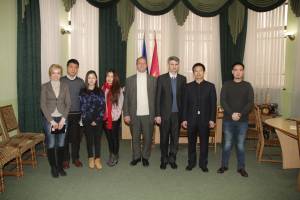 Continuing the Ukrainian-Chinese partnership in the field of education, today, February 7, Zaporizhzhya National University was visited by the Chinese delegation, headed by the Counsellor for Education of the Embassy of the People's Republic of China in Ukraine, Wang Qing Guo. 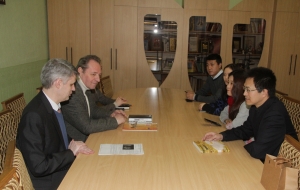 There were the representatives of Zaporizhzhya National University at the meeting: the First Vice-Rector Oleksandr Bondar, the Vice-Rector for Educational Research Volodymyr Volkov and the Head of the International Office Nataliya Kostenko.
The First Vice-Rector briefly told the guests about the University and noted that ZNU was the largest university in the Zaporizhzhya region. About 12.5 thousand students study there, 9 thousand of which are the full-time students. Besides, Oleksandr Bondar outlined the variety of specialties at Zaporizhzhya National University. He emphasized the international activities, in particular, regarding the prospects of creation of the Confucius Institute on the basis of the University.
The Vice-Rector for Educational Research Volodymyr Volkov reported about the project. ВHe pointed out that the organizational work for the preparation of documents had been completed by the Ukrainian side. In addition, Volodymyr Volkov expressed his sincere gratitude to the Counsellor for Education of the Embassy of the People's Republic of China in Ukraine Mr. Wang Qing Guo for their active support of the opening of Confucius Institute in Zaporizhzhya National University.
During the meeting the representatives of Zaporizhzhya National University stressed that the cooperation of the University with the People's Republic of China continued to gain momentum. Thus, during the last year's visit of our University by the delegation of Anhui Pedagogical University (China), the partners reached an agreement with the administration on the opening of the Confucius Institute in ZNU. 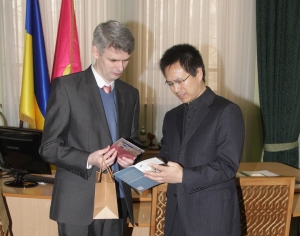 Then the Ukrainian and Chinese universities signed a cooperation agreement, which, in addition to the opening of the Confucius Institute, also involved the development of mutually beneficial joint projects in the fields of education and science. According to the agreement, this refers to the joint researches, academic exchanges of students and professors, double degree program and the organization of joint scientific and educational activities. 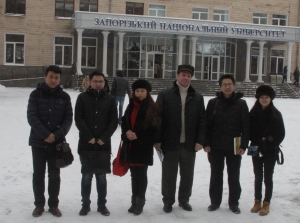 In turn, the Counsellor for Education of Chinese Embassy in Ukraine, Mr. Wang Qing Guo thanked the University and its administration, in particular, the Rector of ZNU Mykola Frolov for the active support of these important educational initiatives. Also, he underlined a great interest of the Chinese side in the implementation of such partner projects. The guest spoke about several joint educational programs between Ukraine and China on academic exchanges, internships, etc.
In this context, the Head of the International Office Nataliya Kostenko noted that the webpage of the University contained links to similar projects: http://sites.znu.edu.ua/international-relations/
One of the last projects is implemented together with the Ministry of Education and Science of Ukraine. More details can be found at: http://www.csc.edu.cn/laihua/
Finally, the delegation took a guided tour of the campus, and then they were invited to go on an excursion to the Museum of the History of Zaporizhzhya Cossacks on the famous Khortytsia Island.
Photo gallery: https://www.facebook.com/pg/univerzp/photos/?tab=album&album_id=1505650749464313