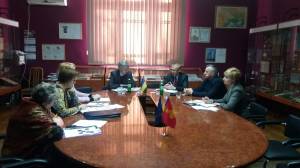 In Zaporizhzhya National University continues the fruitful work on the establishment of new and mutually beneficial cooperation with foreign universities, the increase of academic mobility of teachers and students, the development of project activities of the University.

So, the other day ZNU was visited by the staff of the University of Economy in Bydgoszcz (Poland) – дthe Director of the Institute of Health and Sport, representative of the Chancellor of the University Oleksandr Skaliy and the President of the cluster "Europe in the East" Jerzy Rutkowski. During their meeting with the representatives of ZNU administration they discussed the conclusion of a framework agreement through which the training of Ukrainian and Polish students in the double degree program, as well as internship of lecturers and students and joint project implementation would be possible.
Oleksandr Skaliy conveyed greetings and gratitude to the leadership of ZNU from the Chancellor of the University of Economy, Honorary Consul of Ukraine in Poland Krzysztof Sikora. He told about the structure and the peculiarities of functioning of the non-state Polish University founded 25 years ago. It is one of the largest private universities in Poland. It cooperates with the Ukrainian higher educational institutions of Kyiv, Kherson, Kharkiv, Lviv. It is planned to cooperate with the Zaporizhzhya National University as a leading university of Zaporizhzhya region.
Mr. Skaliy offered the leadership of Zaporizhzhya National University cooperation in four directions. First of all, in his opinion, the teachers of our University may be interested in scientific and pedagogical internships. In addition, it should be noted the double degree program, thanks to which Ukrainian students will be able to obtain diplomas of both universities. Today in eight Ukrainian universities there are groups of double degree which take training on the basis of the Polish University. 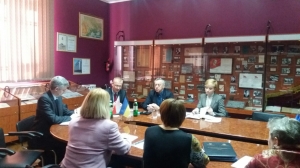 Furthermore, during the winter semester Ukrainian students can study according to the program of their University and complete the distant courses of foreign teachers in English, Polish and Russian. But in the summer they are invited to Poland for a month and a half of intensive training and exams. And then by the autumn the University of Economy offers the temporary job vacancies, where young people will be able to refund money spent on tuition fees and even make a profit.
The representatives of University of Economy suggested the Ukrainian scientists to join the international project activities. The fact is that the Polish University gets only 10% of a profit from the tuition, and the remaining 90% - thanks to the fruitful participation in various project programs. Also the representatives of ZNU proposed a base for internships in Poland. The fact is that the cluster "Europe in the East" includes not only the University, but the plant, a number of hotels, hospitals, on the basis of which the students undertake an internship. Besides, the best specialists of different professions teach at University, increasing the competitiveness of students at the labour market.
The representatives of the Polish delegation assured that their proposals are of great interest to our University, in particular, regarding the grant and project activities in ZNU. Therefore, the cooperation with the Polish University will help propel the project activity in our University to the whole new level.
The First Vice-Rector of ZNU Oleksandr Bondar thanked the honorary guests of the University for the useful suggestions. He also expressed hope that soon a framework agreement would be signed, and it would contribute to the development of international relations and the rise of scientific work of both universities.