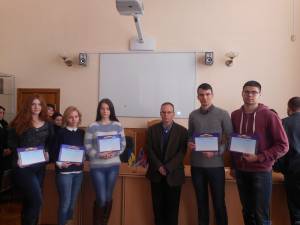 For the third year in a row, at the Faculty of Law of ZNU, held a competition "The best experts of legal English" is held at the Faculty of Law of ZNU with the assistance of the staff of the Department of Foreign Language of Professional Direction of the Faculty of Foreign Philology. The students of the faculty who want to demonstrate their knowledge of professional English are invited to participate in it. During the competition they represent their skill level, doing grammar exercises, working with professional terminology, creating a thematic essay. They also take part in a general discussion.

This event differed from the previous year because its objectives were formed with a focus on the test of the students’ speaking skills. The tasks 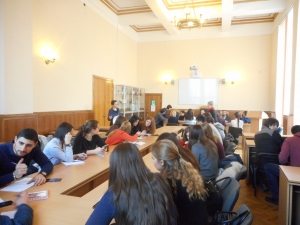 were prepared, according to the latest legislative provisions of Ukraine, by the Department of Foreign Language of Professional Direction under the leadership of its Head Stanislav Ivanenko.
The event was attended by over 80 law students of 2-4 courses. The competent jury determined the best experts of the English language. Its chairman, as all three years in a row, became the Professor of the University of Liverpool Kiron Reid. They chose those students who demonstrated the best knowledge, were able to prove in a persistent struggle a high level of their professional language training. The winners of the event were: Oleh Pelypenko, Dmytro Romanchuk, Yelyzaveta Danylchenko, Yelyzaveta Donnik and Anna Kiopre.
According to Kiron Reid, such events promote the increase of level of the students’ professional communication skills, expand their opportunities to communicate with foreign colleagues. He noted a high level of the participants’ training and expressed the hope that further the contest "The best experts of legal English" will also be held at the Faculty of Law and in the future the event will involve legal practitioners. In his opinion, this will promote the integration of legal education and enforcement, the improvement of the professional communication.