For the second time "Startup Battle" was held in ZNU 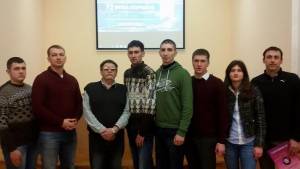 Recently the 72nd "Startup Battle" has been held in ZNU. For the second time the University held a competitive selection of the best ideas and economically justified business plans that had a chance to get the funding from the organizers. Zaporizhzhya National University was represented by the Vice-Rector for Educational Research and Academic Affairs Oleksandr Hura and the Head of the Department of Project Activities Nataliya Kovalenko. 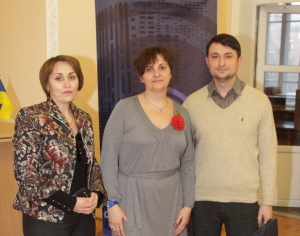 The event was organized by the International Investment Platform "Startup.Network", International education program "EUROSTUDENT ™" and "Networking School" of Solomiya Boyko with the support of the Research Department and the Department of Project Activities of ZNU as well as the business incubator "BI-Zaporizhzhya".
"Startup Battle" traditionally consisted of two parts: business and investor – "Presentation of startups". First of all, the experts and business representatives told the participants about the organizational aspects of the implementation of business ideas and the possibility to get the investments, and also gave answers to all questions. Then the participants presented their own business projects, and the expert committee selected the best and ready for implementation business ideas, raised comments and gave suggestions for their improvement.
This time the consultants were the Director of the business incubator "BI-Zaporizhzhya" Oleksandr Cherep and the Head of the Regional Entrepreneurship Support Fund Volodymyr 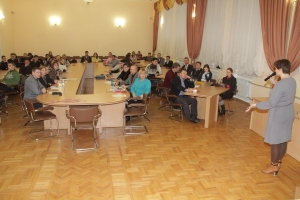 Stepanenko. They spoke about the programs that provided lending to small and medium-sized businesses, the business incubator "BI - Zaporizhzhya" which operated on the basis of ZNU and not only helped the young entrepreneurs start their own business, but the students begin to implement their entrepreneurial ideas during the studies at university. The most priority directions for business project financing today are the production of agricultural products, green tourism, innovation, etc.
The participants of "Startup Battle" were 9 teams of entrepreneurs, who that day presented interesting projects. According to the results of the expert committee’s voting and all those who expressed their opinion on the website of the Investment Platform, the project "Getmilitaryphotos" of Oleh Zabelin was recognized as the best one. ІThe idea of the project is to sell copyright photos and illustrations through the website. The second best project is the so called "green project" "Biofuels" of Dmytro Chasovenko.
The business ideas were also presented by the students of the Faculty of Economics of ZNU – Vladyslav Konyev and Daria Penzyeva. Daria has developed a business plan "Cultivation of Everbearing Raspberry", an idea which was liked by all those present. She took the third place according to the expert committee, but the guests gave her the second position. Vladyslav took the sixth position in the ranking according to the experts and the eighth according to the guests, presenting the idea of "Zaporizhzhya Energy Audit".
The Head of the Research Department Viktoriya Menyaylo notes that the participation of ZNU representatives in the "Startup Battle" is of great importance for the University, because it doesn’t only introduce students to the international project activities, but forms a rating of the higher education institution. Today one of the main factors of the university ranking is the number of startups created and implemented by its representatives.