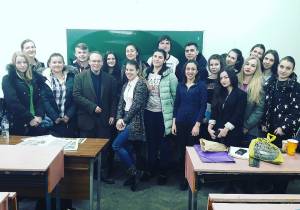 In Zaporizhzhya National University the teachers are constantly looking for the ways to interest students in learning and, at the same time, provide them with the most modern high-quality knowledge. The foreign scientists with whom the University cooperates are involved in classes to enhance the educational process. So, this time the Professor of the University of Liverpool (UK) Kiron Reid visited lecture on «International journalism» (lecturer– Tetyana Ivanyukha) at the Faculty of Journalism. It is worth noting that Kiron Reid was invited by the representatives of the administration of the University for teaching at the Faculty of Law and Faculty of Foreign Languages in the framework of the implementation of the concept of foreign language learning. By the way, he is not only a scholar, but also an observer of the OSCE mission in Ukraine. 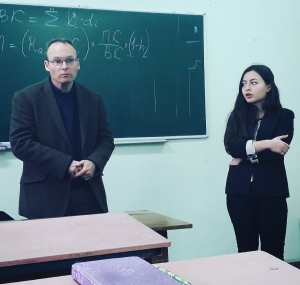 The Professor Kiron Reid’s greeting: «Hi, glad to see you!» was a little bit surprising for the audience, because the students set themselves up for the traditional lecture. Within an hour, the guest discussed different topics with future journalists (an interpreter for the distinguished guest was the 4th year student of the Faculty of Foreign Languages Yevheniya Romanova). During the meeting they discussed relevant topics such as a military journalism and the BBC neutrality in the treatment of news, disputes in Facebook and lack of Zaporizhzhya content in social networks. Besides, the students were interested in the main characteristics of teaching at the Faculties of Journalism in the UK.
In addition, Kiron Reid not only spoke about foreign editions, but also demonstrated a number of British newspapers and magazines. The students of ZNU liked that informative and interesting conversation. They thanked the guest for the meeting and the faculty members for organizing useful activities.