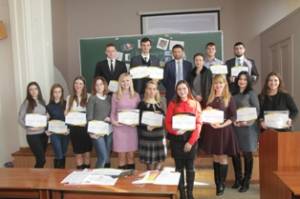 On February 28 at the Faculty of Law of Zaporizhzhya National University was held a competition of youth projects, which was attended by the leading legal scholars and students. The event was organized by the leadership of the Faculty of Law and the representatives of Zaporizhzhya branch of the Center for German Law on the basis of ZNU supported by the Center for German Law of Taras Shevchenko National University of Kyiv.

The expert and organizational support to the projects in the competition was provided by the academic staff of the Faculty of Law. The jury of the competition, which determined the best projects, included the legal scholars of the Faculty of Law of Zaporizhzhya National University headed by the Dean Tetyana Kolomoyets and the representatives of the Center for German Law of Shevchenko National University of Kyiv headed by the Chairman of this center Roman Melnyk. He stressed that participation in such contests was important, because the graduates of the Faculties of Law of the Ukrainian universities who planned to continue their education and to work in the specialty should be proficient in foreign languages. Thus, German language skills can give the opportunities to undertake an internship in the specialty and to conduct free research in Germany. 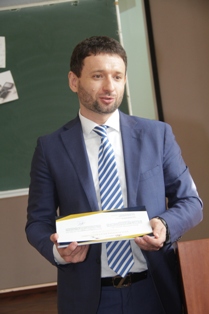 According to the organizers, the purpose of this contest is to spread the learning of German legal language among young lawyers and the in-depth work with the German literature, to promote the summer and winter schools for German law, to spread the activities of the regional branch of the Center for German Law and the cooperation with Kyiv Center for German Law, as well as to deep Ukrainian-German collaboration in the area of law.
It should be noted that the main objective of this competition is to attract young people to active development of new project initiatives. Besides, the project seeks to contribute to a theoretical and practical preparation of high-quality projects and to receive international grants. There were 14 projects of young lawyers of ZNU (6 team and 8 personal projects), who prepared their creative and interesting presentations.
The topics of the projects were the organization of the summer school for German law on the basis of ZNU with advanced study of German legal regulations and the involvement of German experts; the introduction of short term courses on German legal language; the development of the Centre for German Law of KNU with the help of the student competitions, round tables, open days, organization of online communities in social networks, webinars with the representatives of foreign universities, attraction of German speakers; the promotion of the study of German legal language for beginners; the cooperation of Kyiv Center for German Law with other educational organizations and the German concept of international law. It is worth mentioning that there were selected the best projects which would be presented in Kyiv and would be implemented in Zaporizhzhya. 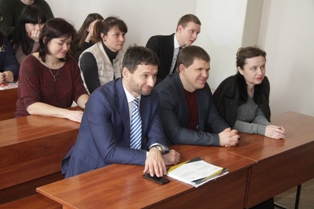 Moreover, the winners of this stage of the competition will get extra points to compete with the students from other universities for the grand prize – a trip to Germany to participate in an internship in a German law firm. Generally, this event gave students the opportunity to get new experience and impressions, acquaintances and a lot of new and useful information that would help them in their future legal practice and in the study of the German language.