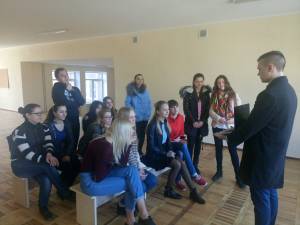 At the Faculty of Foreign Languages of Zaporizhzhya National University teachers don’t limit the educational process. They seek to encourage students to learn foreign languages outside the classroom. So, today there is a drama group at the faculty under the guidance of a lecturer of the Department of Second Language Studies Maryna Trofymenko.

The idea of such creative extra-curricular activity appeared due to a recent internship of Maryna Trofymenko at the University for Foreigners of Perugia (Italy). According to the lecturer, there she took an Italian Theater History course and mastered the theater techniques in teaching foreign languages. Besides, this format of classes is connected with the teacher’s focus of scientific interests, including professional training of future teachers of foreign languages by means of animation technologies.
Talking about the activities of an unusual drama group, its head notes: "Our goal is the formation of students’ foreign language competence. We aim at improving foreign language skills, while having fun. In addition, the student members of the drama group have the opportunity to discover their personal talents and become more confident. During the drama practice they need to regularly work on foreign language speech, on correct intonation, tonality. What’s more, this is a great opportunity to discover the peculiarities of another culture, to enrich your perception of the world. That is why the drama classes are popular among students".
Anyone who wants to learn French and to try himself on the role of actor can join the drama practice which is held every Thursday at the "small stage" near the event hall of the educational building № 2. It starts at 13.00.