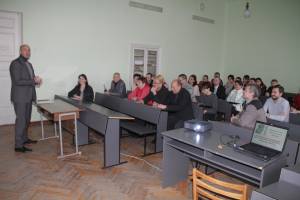 Yesterday in ZNU was held a traditional Inter-university scientific-practical conference "Modern aspects of physical and mathematical research". The event was organized by scientists of the Department of Physics of Metals. The representatives of Zaporizhzhya National Technical University also were the co-organizers and participants of the conference. Besides, the conference was attended by representatives of local businesses. 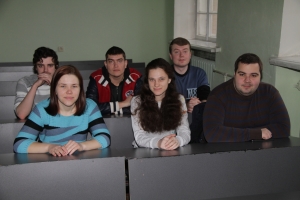 In the beginning of the event the Vice-Rector for Research Hennadiy Vasylchuk addressed the audience with a welcome speech. He stressed: "It is pleasant that the meeting of young scientists that will develop national science in the future, is held on the basis of our University. Today the representatives of the exact sciences create advanced technology and move the needle. Physics and mathematics of ZNU are developing in the field of nanotechnology and alloying of materials".
The conference participants – students and young scientists – made presentations and shared their experience, told about the achievements in the branches of physics and mathematics, natural and cybernetic sciences. Their studies contained important results in such research fields as problems in physical material science, modelling of physical processes, computational mathematics and system analysis, problems of analysis of complex systems.

The second part of the conference was devoted to the research directions "Optical microscopy Zeiss" and "Electron microscopy Zeiss" presented by the Head of the Department of Material Science of "OPTEK" Evgeniya Onoprienko. There was also a demonstration of devices developed by the firm. The guests also held a master class for participants of the conference on the device use during the investigations. According to the results of the meeting, there was reached an agreement on holding joint workshops and further cooperation.