Marathon of Francophonie gathered fans of French language in ZNU 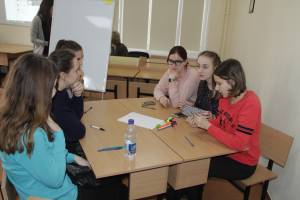 Yesterday in ZNU was held an all-Ukrainian Marathon of Francophonie, in which took part nine Ukrainian universities and French-speaking representatives of the cities of Zaporizhzhya, Kyiv, Chernivtsi, Bakhmut, Dnipro, Lviv, Odessa, Rivne, Kharkiv. Among the participants there were students, high school students and all people who study the French language and speak it. The event was initiated by the Embassy of France in Ukraine and timed to the International Week of Francophonie. 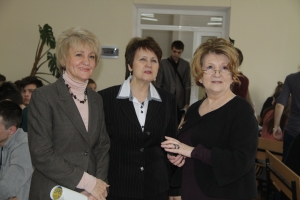 The basis for its holding in the framework of the marathon in Zaporizhzhya was the Zaporizhzhya National University. In the multimedia room № 226 of the educational building № 2 gathered together the students of the Faculty of Foreign Languages of the specialty "French language and literature (translation)" and those who study French as a second foreign language, the teachers of the faculty and, especially, of the Department of Romance Philology and Translation, the upper-form pupils of Zaporizhzhya gymnasium № 50, as well as the representatives of Zaporizhzhya branch of the "Alliance française". The coordinators of the Francophonie Day were the Dean of the Faculty of Foreign Languages, Associate Professor Halyna Moroshkina, the Head of the Department of Romance Philology and Translation, Associate Professor Iryna Sharhay and the Director of "Alliance Française de Zaporojie" Liudmyla Bohdanovska. The main goal of the day was the creation of a French-speaking environment for more effective French language learning, as well as the discussion of such topical global issues such as the environment and the formation of the image of model citizen. The participants communicated not only within a particular classroom, but also had a videoconferencing with the representatives of the Embassy of France in Ukraine, had the opportunity to see the results of the activities of the Francophone groups from other cities which took part in the marathon.
The students and pupils took part in various interactive games. They answered the organizers’ questions, created their own videos, sang songs, and finally got a lot of positive emotions and good mood from communication with each other and with the representatives of the Republic of France. The participants of marathon were welcomed by the Secretary General of the International Association of Francophonie (Paris) Michaëlle Jean. By the way, the lecturer from France Jean-Luc Issle actively participated in the organization and holding events of the Francophonie Day in ZNU and communicated with the participants. 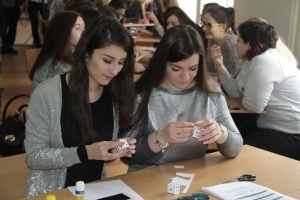 Besides, the representatives of ZNU took the 2nd place for participation in joint with other universities video game on the ecology "Kahoot".
Thus, the participants and especially students of the University expressed gratitude to their teachers and coordinators for such an interesting program and a great opportunity to communicate in their favourite French language.