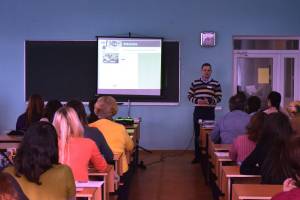 Such methodological events are held traditionally twice a year at the faculty in cooperation with the Scientific-Methodological Center of the Department of Education and Science of Zaporizhzhya local authority. The main goal of this cooperation is the establishment of future promising relations in the teaching of foreign languages in the format of "school – higher education institution". 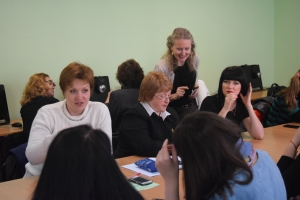 Traditionally, the seminar is held in sections: English, French and German languages. This year the event organizers have created conditions for the functioning of the Spanish section, which was conducted by the Associate Professors of the Department of Romance Philology Oksana Tyelkova, Mariya Byba, discussing the issue of use of multimedia training tools in learning Spanish. An Associate Professor of the Department of Romance Philology Nadiya Stryukova and a senior lecturer of the same Department Hanna Klymenko presented the features of teaching conditionals within the school course of the Spanish language.
The teachers of English discussed the game techniques in teaching high school students (moderator of the section – Associate Professor of the Department of English Philology Olena Luzhanytsya); considered practical advice on the use of songs, poems and games while teaching English to primary school pupils (6-10 years old) through the examples of teaching materials Super Minds UMK together with the Associate Professor of the Department of Foreign Languages of Professional Direction Svitlana Lyaturynska; the Associate Professor of the Department of Theory and Practice of English Translation Svitlana Prus gathered colleagues for a round table on the topical issues of multiculturalism and its reflection in American English, typical relations between ethnic communities and their reproduction in language (Spanglish, Japlish, Black English, etc).
A lot of English teachers attended the workshop of a specially invited teaching methodology expert of the publishing house Pearson, certified examiner for international exams Henadiy Bilous, who presented modern methods of activation of pupils’ cognitive activity at the lessons of foreign language with the involvement of a variety of multimedia technologies. During the meeting, the attendees not only had the opportunity to read a review of methods based on modern books, but to test them in practice. The workshop was conducted in English and was interactive. 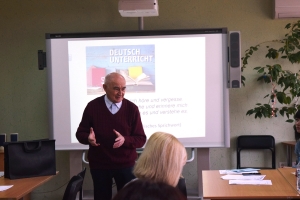 A senior lecturer of the Department of Second Language Studies and a lecturer of the same Department Maryna Trofymenko invited colleagues to the discussion regarding the different fragments of the use of interactive technologies such as: role-playing games, intelligent cards, theatre techniques and other game elements that contributed to the efficiency and intensification of the process of learning the French language. The work of teachers of the German language was dedicated to the presentation and discussion of the special aspects of using an inductive method in learning the German language.
The peculiarity of such workshops is the involvement of native speakers. This time the participants worked with the representatives of America, Germany and France.
So, Seneca Ryan, a representative of the U.S. Department of State-sponsored English Language Fellow (USA), in an interactive form presented the modern strategies of reading and speech activity at the foreign language lessons, involving all those present in the audience. A journalist from France, a lecturer at the Department of Romance Philology, Jean-Luc Issle discussed with colleagues the presidential elections in France, the tendencies of the electoral process and the outstanding personalities in the political ring, as well as involved the teachers of French in a role play devoted to the electoral process.
A long standing partner of the Faculty of Foreign Philology, a senior lecturer-translator from Germany Herbert Schonemann took part in the work of the German section regarding the inductive methods of teaching the German language.
The workshop participants appraised highly the event for the opportunity to discuss modern trends in foreign language teaching, involvement in work with the native speakers, and also expressed gratitude to the representative of the Scientific-Methodological Center of the Department of Education and Science of Zaporizhzhya local authority Iryna Nahornova, the Dean of the Faculty of Foreign Philology, Associate Professor Halyna Moroshkina, the organizer of the workshops, Associate Professor Olga Kanibolotska.