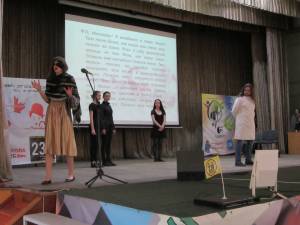 On March 28, at the Faculty of Foreign Philology the 3rd year students of almost all specialties of the faculty under the leadership of the Candidate of Philological Sciences, Associate Professor of the Department of German Philology and Translation Valentyna Botner and the Deputy Dean for Educational Work Nina Zakharova prepared the theatrical performances of the best playwrights’ famous plays of the late 19th and early 20th century in the original language. 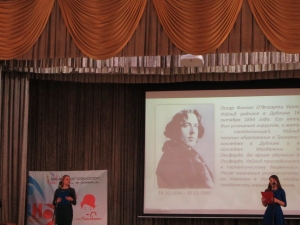 Thus, the students of the Faculty of Foreign Philology of the specialties "English Language and Literature", "Translation (English)", "French Language and Literature", "Spanish Language and Literature", "German Language and Literature" within the course "History of foreign literature of the late 19th and early 20th century" performed excerpts from famous dramas and plays: O. Wilde " Salomé", B. Martinez "Game of Interests", B. Shaw "Pygmalion" and "Mrs. Warren's Profession", G. Hauptmann "Before Sunrise" and M. Maeterlinck "The Blue Bird".
The presenters of the event were the 3rd year students of the Faculty of Foreign Philology Kateryna Zhylkina and Mykola Filonenko.
The students with interest and curiosity deepened their knowledge of foreign languages thanks to this non-standard form of learning languages using famous literary works. It should be noted that one of the objectives of this event is to encourage students to study and improve skills of understanding foreign languages and foreign works. During the event, the students demonstrated a high level of knowledge of foreign languages, their creativity, talents and the ability to prepare theatrical performances.
In addition, the event was attended by the students of other faculties (Philology, Journalism) who also want to learn foreign languages. At this event they had the opportunity to get to know the plays of famous playwrights in the original language and with video translation of these works.