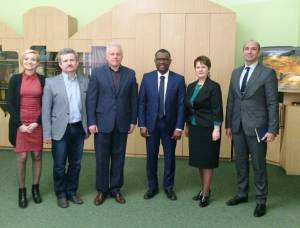 РThe Rector of ZNU, Professor Mykola Frolov met with the guest of the University – Mr. Nirin Randrianantoandro, a Professor at the Université du Maine, coordinator of the international program ERASMUS+, Deputy Director of the Faculty of Physics for international cooperation to discuss the issues of further cooperation and preparation of a double master's degree in Physics. Also the meeting was attended by: the Vice-Rector for Research Hennadiy Vasylchuk, the Dean of the Faculty of Foreign Philology Halyna Moroshkina, the Dean of the Faculty of Physics Vitaliy Horbenko, the Head of the Department of International Relations Natalya Kostenko.

Mykola Frolov told that 12.5 thousand students studied and 1300 professionals worked at ZNU, there are 15 faculties, 13 of which were in Zaporizhzhya, a bachelor degree contained 43 specialties, and a master's degree – 46, a state-financed education reached 35%, so the University is one of the major educational and research institutions of the Ukrainian academic space. Besides, Mykola Frolov stressed that Zaporizhzhya National University appreciated a long-term cooperation with

the Université du Maine. The Rector paid special attention to the Concept of foreign language learning, which was successfully implemented in Zaporizhzhya National University. The French language takes pride of place in this project (500 people study it). Furthermore, one of the European languages is studied by the students (during the whole period of study) as well as by the teachers (in the appropriate courses).

In turn, Mr. Nirin Randrianantoandro expressed his point of view on the perspectives of joint work for the preparation of a double master's degree of ZNU and the Université du Maine and the conditions of internships and education in the framework of the mobility program ERASMUS+. The Deputy Director of the Faculty of Physics for international cooperation du Maine noted that their institution was proud of the cooperation with ZNU. He emphasized that the Université du Maine was the first University which established cooperation with the Ukrainian higher education institution. The honoured guest 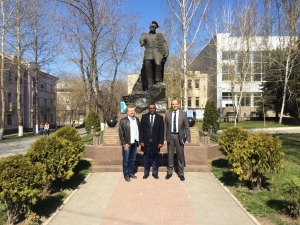 mentioned that three students from Zaporizhzhya trained in his laboratory, two of them were postgraduate students, and the third one is a master’s degree student. So, the French lecturers are excited about the opportunity to teach such talented and smart students, who are the representatives of Zaporizhzhya National University. Besides, Mr. Nirin Randrianantoandro stressed that the Université du Maine and the ZNU were similar in their philosophy and view of life, they were united by their common opinion for the development of the educational process.

The Rector also discussed with the guest the tendency of unification among the universities in France. For example, an educational corporation, which includes the Université du Maine, consists of 17 institutions and has 250 thousand students. Mykola Frolov noted that Ukraine faced the same challenges. He is an advocate of such idea.

During the week the guest will give lectures, will take part in the round table meeting for discussion of scientific challenges and opportunities for further cooperation, will participate in the opening of the II stage of the Ukrainian Student Competition in the specialty «French Language and Literature» and will meet with the students of the French Language Center, participants of the program «ZNU – du Maine».