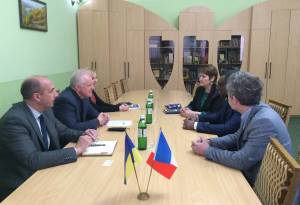 In Zaporizhzhya National University during the week lasted the visit of the Deputy Director of the Institute of Science and Technology of the Université du Maine for international cooperation, Professor Nirin Randrianantoandro. During this time he gave a lecture for students of the Faculty of Physics, participated in the round table devoted to the problems of magnetism and nanomaterials, visited the Faculty of Foreign Philology and also took part in the opening of All-Ukrainian Student Competition on specialty "French Language and Literature". According to the coordinator of the visit, the Dean of the Faculty of Foreign Philology, Associate Professor Halyna Moroshkina, a visit to the University, the teachers and students’ level of knowledge, and a general atmosphere in our educational establishment made a good impression on the honorary guest.

Halyna Moroshkina notes that Nirin Randrianantoandro has visited ZNU in the framework of the international academic exchange program "Erasmus+", which provides for the teachers and students’ exchanges between our universities. Although this year the program becomes due, Mr. Randrianantoandro, who coordinates the program in the French University, assured that our University had timely sent an application for participation in the program and had fulfilled all the necessary requirements. In general, the administration of French University considers Zaporizhzhya National University as a reliable partner and is satisfied with the progress of the implementation of double degree program between universities. So, they will be glad to continue to cooperate with ZNU.
Except the interaction with the representatives of the Faculty of Physics, Nirin Randrianantoandro visited the Faculty of Foreign Philology. He was very impressed by the material and technical base of the faculty and technical equipment. The guest of honour stressed that it conformed to the European standards for the training of specialists in the field of foreign language teaching and translators. Besides, he noted that at the Université du Maine he became convinced of the ZNU students’ good training and their motivation, the desire to acquire new knowledge, and how easily our young people were improving their French language thanks to a good theoretical basis. Three students of the Faculty of Physics of our University are now working in the laboratories under the guidance of Nirin Randrianantoandro, and this is the best evidence of his appreciation of Ukrainian education.
The stay in ZNU in the framework of the international academic program "Erasmus+" has finally convinced him of the high level of teaching the French language. Thus, during a round table meeting at the Faculty of Physics, where the representatives of the Faculty of Foreign Philology were translators, he distinguished a graduate of the Faculty of Foreign Philology, lecturer of the Department of Romance Philology and Translation Nadiya Opashnyuk and a master’s degree student of that faculty Maksym Rudenko. Generally, the guest assured that Maksym impressed not only with his knowledge but also with his human qualities, and, therefore, he sincerely wished to student success in the career building.
Furthermore, during the opening of the II stage of the All-Ukrainian Student Competition on academic discipline "French Language" (for students of non-linguistic faculties) and the II stage of the All-Ukrainian Student Competition in the specialty "French Language and Literature" (for students of the specialty "French Language and Literature), Nirin Randrianantoandro emphasized the atmosphere in the University and at the Faculty of Foreign Philology made a good impression on him. The guest also mentioned that he was impressed by the Ukrainian students’ level of French language, thanked them for the language choice, and assured that in the future this would lead them to success.
According to the guest, the visit was fruitful and full of good memories. He thanked the leadership of ZNU, especially its Rector Mykola Frolov, the Deans Vitaliy Horbenko (Faculty of Physics) and Halyna Moroshkina (Faculty of Foreign Philology), the specialists of the Department of International Relations, the lecturers and students for their hospitality, openness to cooperation, desire to provide students with advanced knowledge and educate highly qualified specialists. He expressed hope for the further fruitful cooperation between the Université du Maine and Zaporizhzhya National University.