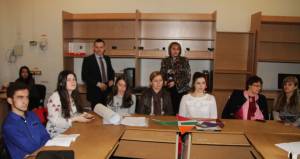 Today, the twelfth of April, in Zaporizhzhya National University launched a traditional conference of young scientists of our University, which is attended by more than 900 researchers who are beginning their career in science. The conference was organized by the Research Department and Scientific Society of Students, Postgraduates, Doctoral Candidates and Young Scientists of ZNU.

Today, April 12, the first sectional session of the conference was held at the Faculty of Mathematics. 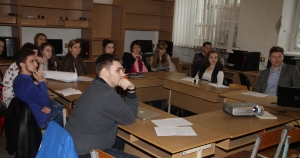 So, in order to congratulate young scientists with the beginning of the conference the event was attended by the Chief of the Research Department Viktoriya Menyaylo and the Head of the Department of Postgraduate and Doctoral Studies Yuriy Kahanov, that were very impressed with the high level of reports and fruitful discussion between experienced scientists and young researchers.
Viktoriya Menyaylo focuses on the fact that the developments of the students of the Faculty of Mathematics are being actively implemented in practical activities of our University, among which is the website of the Bulletin of Zaporizhzhya National University and the electronic research, development and production platform "Incub". They are now completing the development of software to identify extra points for scholarship students rating after downloading the necessary documents. The Chief of the Research Department expressed hope that the first startup of ZNU would be at the Faculty of Mathematics, which was a great base for training highly qualified specialists of IT-industry.
The Head of the Department of Postgraduate and Doctoral Studies Yuriy Kahanov noted a significant increase in scientific activity of young people at the faculty, because last year a record number of graduates of the Faculty of Mathematics embarked on postgraduate studies of ZNU and encouraged students-participants of the conference to plan their academic future and to join the young scientific elite of ZNU.