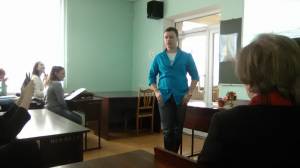 A motivational factor plays a great role in the study of foreign languages. Lecturers and students of the Faculty of Foreign Philology know it very well, so they try to use every opportunity to get acquainted with the national culture of countries the languages of which are studied. Considering this important factor, the lecturers of the Department of Second Language Studies try to attract students to the cultural heritage of the countries through the foreign authentic poetry.

At the initiative of the Head of the Department of Second Language Studies, Associate Professor Kateryna Ruzhyn last week at the Faculty of Foreign Philology was held a warm and atmospheric event – the festival of foreign-language poetry «Poetic April». The meeting was organized by the 4th year students of the specialty «Language and literature (English)» together with the Associate Professor Alla Mamedova. 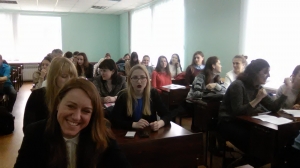 The hosts of the event represented artists, poems which were during presentations, the era and the direction in which they worked. During the declamation of poetry there were the authors’ portraits and the thematic illustrations for their works on the screen as well as music that helped to feel and understand every poem, and doubled an aesthetic pleasure from the festival. It should be noted that the presenters spoke in two languages: in English that is known by all students of the Faculty of Foreign Philology as first or second foreign language, and in Ukrainian. Furthermore, the declamation of Robert Stevenson and George Byron’s poems by the Associate Professor of the Department of Second Language Studies Vyacheslav Aleksandrov created a furor.

In the end, the Department Chair thanked the organizers of the festival, students who participated in the event, their teachers who inspired to participate in it. Kateryna Ruzhyn noted that an important factor in the study of foreign languages was not only «the prose of the classes», but also «the poetry of the culture» which was learned through the immersion in the poetry and music.