Students met with lawyer and politician from Austria Andreas Gauss 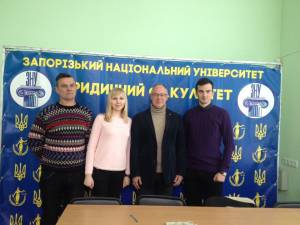 25.04.2017 10:17 All Top news Faculty of Law Zaporizhzhya branch of the Center for German Law of the Taras Shevchenko National University of Kyiv

Recently within the limits of the work of Zaporizhzhya branch of the Center for German Law of the Taras Shevchenko National University of Kyiv, which operates at the ZNU Faculty of Law (Head: the Dean of the Faculty of Law Tetyana Kolomoyets), was held a meeting with the representative of Austria, Mr. Andreas Gauss. The students had the opportunity to find out some moments of political and cultural life of Austria and to communicate in the German language. The coordinator of the meeting was the lecturer of the Department of Second Language Studies of the Faculty of Foreign Philology Ihor Sklyar.

Law students, in particular Oleh Pelypenko, who heads the student sector of the Zaporizhzhya branch of the Center for German Law, study the German language of professional direction. Therefore, during the meeting with Mr. Andreas Gauss they had an excellent opportunity to communicate directly with a native speaker and also learn about some features of German and Austrian culture and law. The talk was about the peculiarities of the educational process, government and law, cultural specifics in Austria, Germany and Ukraine. The participants also raised the issue of the main features and the differences between the German and Austrian languages. The guest, a polyglot, knows and is fluent in about ten European languages, including Russian, and now he begins to study Arabic. Therefore, he gave some valuable pointers on how to learn quickly a foreign language.

It should be noted that such meetings of students with the representatives of the countries of the European Union provide the opportunity not only to improve their level of knowledge of foreign languages, but also to acquire specific professional competences, which is an important component in the implementation of the concept of academic mobility in ZNU. The leadership and students of the Faculty of Law are grateful to the organizers of the meeting and the guest for the wonderful opportunity to communicate. In general, such events have become traditional within the framework of the Center's work, because it contributes to the development of the international cooperation and integration of Ukrainian education into the common European space.

According to Oleh Pelypenko, such visits are very important for law students: they stimulate interest in the development of an appropriate level of foreign language proficiency and increase the level of professional knowledge. By the way, the German-speaking European countries have the opportunity to take Ukrainian students for the internships. It requires the knowledge of a foreign language of professional direction, as well as knowledge of the administrative, economic and agrarian law in these countries. This is a motivation for foreign languages learning and more in-depth study of various branches of law, especially, the comparative studies of the legal norms in Europe and Ukraine.