Ambassador of Estonia Gert Antsu made official visit to ZNU 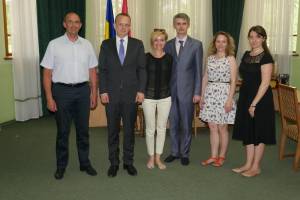 On the 7th of June, the Ambassador Extraordinary and Plenipotentiary of the Republic of Estonia to Ukraine, Gert Antsu, and and the Project Coordinator for Development, Cooperation and Humanitarian Assistance of the Embassy, Anastasiia Mykhailova, visited the Zaporizhzhya National University. The honored guests met with the Acting Rector of ZNU Oleksandr Bondar, the Vice-Rector for Research Hennadiy Vasylchuk, the Head of the International Department Natalia Kostenko and the Associate Professor of the Department of English Translation Theory and Practice of the Faculty of Foreign Philology Oleksandra Holovko. 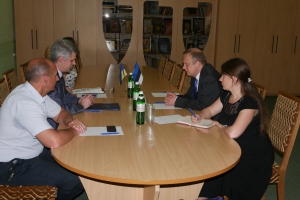 At the beginning of the meeting the Acting Rector of ZNU Oleksandr Bondar noted that it is a great honor for the scientists to welcome the Ambassador at the Zaporizhzhya National University. The modern students are interested in the educational perspectives, such as programs of double diplomas, internships, participation in joint interstate events. Oleksandr Bondar briefly outlined the history of the university's development and its achievements. The structure of ZNU includes 15 faculties. Alos, there is the Foreign Languages Intensive Study Center, the Center for German Language, the partner Goethe-Institut, the French Linguistic Center, besides, the Confucius School and the Italian Cultural Center will start its work in the near future. 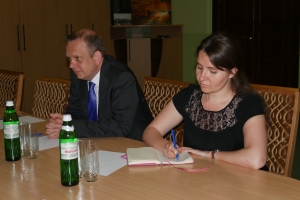 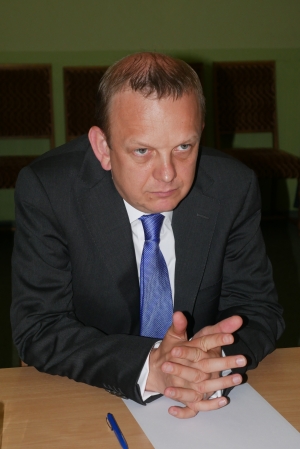 The Ambassador Extraordinary and Plenipotentiary of the Republic of Estonia to Ukraine Gert Antsu, in response, emphasized that he was sincerely glad of such a fruitful relationship between ZNU and Narva College, which is much younger than the University of Tartu, but already has such significant educational work. In addition, he expressed his hope for further visits to meet with talented students of the Zaporizhzhya National University, to feel this special spirit of the Zaporizhzhya youth, who seeks for change and development and makes efforts for this.

The Acting Rector of ZNU Oleksandr Bondar noted that, undoubtedly, such meeting and many other planned events would be organized at the Zaporizhzhya National University. What’s more, it is planned to write a project on the further implementation of the CLIL methodology at the ZNU faculties, with further development of the English language courses at various faculties. Also, a cooperation with Narva College is planned 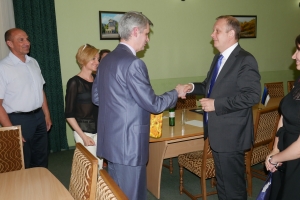 to expand academic mobility for employees and students of ZNU (at the expense of Erasmus+). Oleksandr Bondar stressed that the University also holds a course on the extension of international contacts, which is actively supported by the representatives of the Ministry of Education and Science of Ukraine. In addition, there is a tendency to strengthen the ties between Ukraine and Estonia in the field of secondary and vocational education.

At the end of the visit of the Ambassador Extraordinary and Plenipotentiary of the Republic of Estonia to Ukraine, Gert Antsu and the Project Coordinator for Development, Cooperation and Humanitarian Assistance of the Embassy, Anastasiia Mykhailova, the representatives of the administration of the Zaporizhzhya National University summed up the review of several ways of developing future cooperation, realizing the need to modernize this area of interstate relations. They also wished each other success in further activities and implementation of all planned projects.