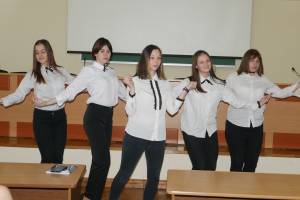 At the end of last week the day of korean culture took place at ZNU. Representatives of South Korea and volunteers of the PO "All-Ukrainian Youth Communication" visited our university. This public organization is the part of the International Youth organization "IYF". Among the guests were Professor from the International Institute for the Development of Intellect (international mind Education Institute, Republic of Korea) Hen Chang Min, volunteer students Ha Min Son and Lee Ha Eun, also there were Valeriy and Alina Kupriychuk, organizers and event holders.

Before the meeting with students, the organizers spoke about the purpose of the visit of the representatives of South Korea and the intercultural volunteer movement that is the part of the international organization's "IYF" activity. The main task of volunteers is to familiarize Ukrainian youth with the culture of different countries and regions, popularize national cultures, expand their horizons and opportunities through communication with representatives of jther countries, establishing intercultural dialogue.

A volunteer from South Korea, student Ha Min Son, presented a video tutorial for the audience. He showed an excerpt from the popular among Korean young people TV series "School", whose heroes are well-known among Ukrainian lovers of Korean culture. At the end of the cultural day, student Lee Ha Eun held master class for the Zaporizhzhia youth and introduced them to the traditional Korean mask culture. Participants were able to draw that masks independently, feeling themselves in the role of oriental masters.

The organizers also invited young people to fill out questionnaries in which they indicated that what is interesting for them in the knowledge of the national culture of other countries, as well as their contact details, in order to participate in the programs and events offered by the All-Ukrainian Youth Communication in future.

Among other things, the participants of the event were invited to take part in the "Korean camp" - a camp for youth, which will be held in Kyiv on April 24-26, as well as to engage in intercultural volunteer programs and youth projects and visit not only South Korea, but also, other countries of the world.

All information about "Korean camp" can be found here.

You can see a photo gallery here.