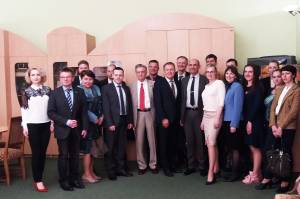 The purpose of delegation's visit was to discuss the prospects of cooperation with representatives of our university administration. Vice-rector for scientific work Gennadiy Vasilchuk chaired the meeting.

During the meeting representatives of the Zaporizhzhia national university and the delegation of the Magdeburg Chamber of Commerce and Industry and German enterpreneurs exchanged brief information on their activities, partnership opportunities, etc. Therefore, the head of the Department of Applied Mathematics and Mechanics of ZNU, the director of the Center for Cooperation Zaporizhzhia-Magdeburg Viktor Gryshchak outlined the following possible ways for further cooperation between our university and foreign partners. For example, the practice of ZNU students and graduates at german enterprises, in multi-sectorial structures, cooperation of foreign colleagues with the Department of Journalism, the Department's of Biology laboratories in research on the quality of water and food, with the Department of Social Pedagogy and Psuchology on the development of the direction of working with children with special needs. There is no doubt that wide opportunities for cooperation are open also for representatives of the Department of Foreign Philology (ZNU).

All the above proposals were drawn up as protocols and submitted to foreign partners for theirs considerayions.

Important to say, that the guests visited zaporizhzhia to open the Ukrainian-german cooperative exchange. The General Manager of Magdeburg Chamber of Commerce and Industry Wolfgang Merz emphasized that the main task of such cooperation is to find and connect the respective companies of the two countries. Individual negotiations lasted more than 3 hours. During this time, more than 40 Zaporizhzhia businessmen were on meetings with German companies. The delegation consisted of heads of enterprises in the machine-building, metallurgy, scientific and technical, medical and educational sectors.

The events were held at the Zaporizhzhia Chamber of Commerce and Industry, which has more than 20 years of cooperation with the Magdeburg Chamber. The participants of the projects noted that today the operation of the Free Trade Zone of Ukraine and the EU opens new business opportunities.

Remember that the first Ukrainian-German cooperative exchange was in Zaporizhzhia in 2007. That was the result of close long-term cooperation between the Chambers of Commerce and Industry of Zaporizhzhia and Magdeburg. Since then, events in the format of individual B2B-negotiations have become traditional and demanded from both Ukrainian and German sides, giving practical results.

For example, the environmental technology company "Granik" was able to open a new successful development page for the purchase of public utilities at auctions in Germany. And that is due to the cooperation of the regional chambers of both Ukraine and Germany.