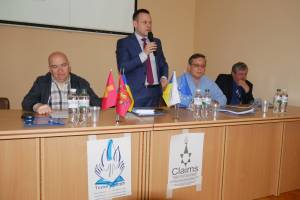 ZNU is organizing a two-day scientific and practical conference "Zaporizhzhia Jewish Readings - 2018" on April 18-19. Representatives of the Department of History (ZNU) and the Ukrainian Institute of Holocaust Studies "Tkuma", the Museum "Memory of the Jewish people and the Holocaust in Ukraine" under the patronage of the Ministry of Eduation and Science of Ukraine traditionally conduct this conference. Scientists from ukraine and Crimea are taking part in the event - historians, philosophers and students, as well as journalists and public figures.

This is the 27th conference, whch, in fact, "lives" at ZNU. After all, founder of this conference was a well-known historian, scientists and teacher from Department of History of ZSPI (now ZNU) - assistant professor Semen Orlyanskiy. Today his work is continued by students from Department of History (ZNU), who were moderators of the event - current Dean of this de[partment, professor Volodymyr Milchev, director of the ukrainian Institute of Holocaust Studies "Tkuma", ZNU doctoral student Igor Shchupak and Mr. Orlyanskiy's son, Professor of Department of Political Science and Law at ZNTU Volodymyr Orlyanskiy. 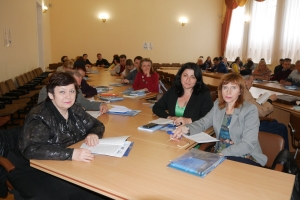 Vice-rector on scientific and pedagogigal work Yuri Kaganov empasized the relevance of this event and the direction of research, which is being developed by its participants. Indeed, the history of the jewish people is directly linked to the history of the Ukrainians, other nationalities living in zaporizhzhia and in Ukraine, and thus form the general context of national history.

During the plenary session, ZNU scientists and guests presented reports outlining new directions of research carried out by scholars and the Contribution of students to this business. Professor Milchev presented vectors of research, which are currently being developed by students from department of History, and emphasized the fact that the work has just begun, and therefore the scientists are expecting a large informative layer of research that should reveal many issues related to the history of the Holocaust in the Zaporizhzhia region.

Also, Professor Oleksandr Davletov in co-authorship with the associate professor of the Department of Ukrainian Studies from zaporizhzhia State Engineering Academy Igor Salamakha, presented an interested report on the topic "Julius Strecher: touches to the political portrait of "anti-Semite No. 1" of the Third Reich".

The conference also hosted teh All-Ukrainian methodological sessions for teachers of history and the sessions of two sections - History and Historical Memory, Pholosophy and Philology.

Among the regular participants of the conference, there was Professor Volodymyr Mosyakov from zaporizhzhia Branch of the European University. He emphasized the significance of this scientific event for both researches and national historical science, and indicates a huge contribution to the ongoing work of representatives of ZNU.

In addition, the guests of Zaporizhzhia and the participants of the conference were able to visit the cradle of the Zaporizhzhia Cossacks and the historic monument of the region - the island of Khortitsa.

The virtual studio of painting Easter eggs was realized at the Philology Department
The student of philological faculty Oleksandr Smyrnov - the winner of the All-Ukrainian competition of student scientific works on the Ukrainian language and literature
The Faculty of History invites to study under the new educational program "History and Politics"
The practice of philology students in Bulgaria continues keep going
Representatives of ZNU took part in the International Conference on the quality of higher education
© 2018 ЗНУ Запорізький національний університет, 69600,
м. Запоріжжя, вул. Жуковського, 66,
Відділ діловодства тел./факс +38 (061) 228-75-08
Приймальна комісія тел. (061) 228-75-38 та (061) 289-12-68
Офіційна пошта