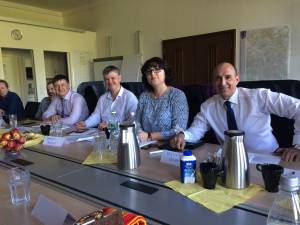 From the eighteenth to twenty first of April in Oberhausen (Germany), important international event "Participation of Citizens in Municipal Governance in Oberhausen and Zaporizhzhia. Work experience report" will be held. The event is the part of the "Quick Start for Ukraine" program. 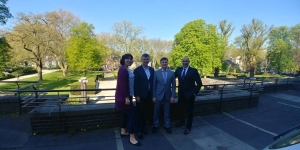 The German expert group was represented by Heinz Alten from the Coordination Center for Public Participation, Hendrik Detmers from the Youth Parliament, Manfred Flore - MP of the SPD City Council, Desbina Kallinikidu - Intercultural Exchange Officer, Mattias Ruschke from the College of public Education, Marita Volter - MP of the CDU City Council, Boris Schwartzman - political scientist and translator, Ingga Dander from the Coordinating Office for Volunteering and others.

Representatives of Zaporizhzhia shared their experience at the city and stet level on building a civil society. Therefore, Gennadiy Vasilchuk presented ZNU internationally and as a vice-rector, ans as a deputy of the City Council. His speech on "Student Self-Government as Element of Civil Society" raised a lot of interest among the participants of the meeting.

Professor Vasilchuk noted that such international activity have a great importance for the formation of ZNU as a leading institution of higher education based on a Europeanmodel in region.