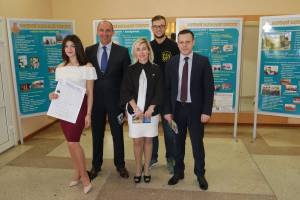 First of all, he drew attention to the powerful educational and scientific potential of the university, which has 13 faculties, 60 departments, which teach in almost 50 specialties, where more than 90 doctors of sciences, professors, about 500 candidates of sciences, associate professors work and teach. Every year, professors from foreign universities (England, the United States, Germany, Poland, China, etc.) come to lecture at various faculties. An interesting student life awaits those who will soon join the youth cohort of ZNU. Among the university students there are many participants and winners of all-Ukrainian competitions and olympiads on various subjects and scientific directions. They take part in academic exchange programs; in particular, they have the opportunity to earn a dual diploma within the framework of a program that operates between ZNU and Du Men University (France). Among other things, the vice-rector wished the entrants to successfully complete their extramural education and to take an introductory campaign in order to join the big and friendly team in a few months.

During the story of the peculiarities of this year's admission campaign, university representatives drew attention to the fact that applicants can submit 7 applications for 4 specialties – for the budget, and any number – for a contractual form of studying. Also, there is the innovation for entering the specialty «Foreign language»: before the drawing up of the ZNO this year a new task has been added – listening and its results must also be included in the test notebook. Therefore, for the participants of the introductory campaign, who will apply on any «Foreign language» branch, only the certificates of the current year will be valid. For other branches, certificates of 2016-2018 will also be relevant. For all branches offered by ZNU, there are provided state budget places, except for the field of tourism, which are based on a contractual form of studying. By the way, the number of budget places for each university, the Ministry of Education and Science of Ukraine will determine separately and only after the completion of filing applications from the entrants.

Among other things, representatives of ZNU explained how the score is calculated. Also, the minimum score for enrollment is 100, and the maximum is 200. Traditionally, the rigorous fulfillment of the technical conditions during the preparation of the ZNO, the priorities of universities, creative competitions and introductory tests, the list of documents for submission, the opportunity to get a seat at the university hostel . The specialists also answered all questions of interest to the participants of the meeting.

Representatives of students' self-government were also present: Anastasia Dolgopolova, head of the ZNU Student Council, her assistants and participants in creative studios Anton Nazarenko, Maria Peresipko and Eduard Boyko. They told about the diverse and interesting life of students of ZNU. 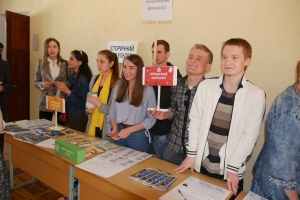 After the general meeting, the participants went to the faculties, where they could penetrate more deeply into the atmosphere of their chosen branch. Here they talked with the deans of the faculties and teachers and were able to ask questions about how it all works.

The 10th grade pupil Tatiana Poda came to the Open Doors Day in advance to learn more about the journalist's specialties and how she should prepare for this profession. The girl was interested in the details regarding the pursuit of an external qualification, the documents required for applying for admission to higher education, and other details of the admission campaign.

Anna Krichmar  (11th grade, Zaporizhzhia Collegium № 96): "On the university's website, I learned about the Open Door Day and came to receive more information, clarifications on the nuances of the Entry-2018, as soon as I plan to apply for the Faculty of Foreign Philology. My dream is to become a translator."

Another student of the graduation class of the School № 101, Katerina Mykyta also dreams of becoming an translator, but will study one of the Slavic languages at the Faculty of Philology of the University. About an interesting informative event, which is periodically conducted by ZNU within the framework of vocational guidance, student learned from the school teacher of the Ukrainian language and literature. 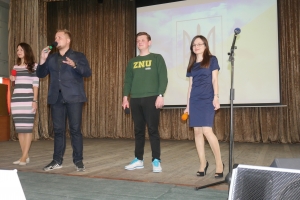 All participants of the meeting emphasized the need for such events, as they help not only to get acquainted with the details of the admission campaign in detail, but also to determine in advance the choice of profession and future profession.