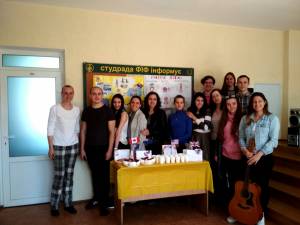 At the Faculty of Foreign Philology this week began the celebration of the Day of English Language and Culture. The event was not accidentally held on the International Day of William Shakespeare. Knowing English today is the musthave of every educated successful person, so it is not surprising that students of the Faculty of Foreign Philology study it as the first and second foreign language throughout the entire period of study. And on this day, English was the official language of communication not only at classes, but also at each break.

The students demonstrated their knowledge of the language and culture of the English-speaking countries, tasting delicious national cuisine, prepared by first year magistrate students from "Language and Literature (English) branch." They impressed the audience with talent in playing musical instruments (group 402a), dancing (Irish dance performed by Anastasia Osipenko, group 301a). And yet – brilliantly and sensitively recited poems in English (Yana Fursa, group 104a, Katerina Krisiewicz, group 401ap) and staged excerpts from works of English classics (Shakespeare's sonnet performed by Lisa Czertkow, group 201a, a passage from "Pygmalion", prepared by group 403ap).

Incredibly delicious cake with a British flag that was made with Mykola Felonenko’ special recipe became a decoration of this holiday. Students also had the opportunity to be photographed in memory of this day in a specially prepared thematic photo zone.

This week, students and teachers of the faculty are waiting for the Days of German and French, as well as the holiday of Spanish-Ukrainian culture.