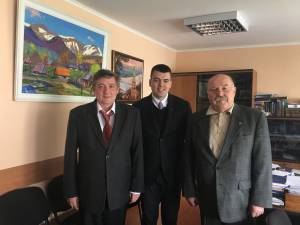 On April 25th, in the premises of the Scientific-Research Institute of Private Law and Entrepreneurship (SRIPLE) named after Academician F. Burchak of the National Academy of Legal Sciences of Ukraine (NALS of Ukraine) in Kyiv, a discussion was held on the creation of a Educational and Scientific Center for Sport Law at the Zaporizhzhia National University.

At the same day there was a meeting of the Academic Council of the Scientific-Research Institute of Private Law and Entrepreneurship, named after Academician F. Burchak of the National Academy of Legal Sciences of Ukraine, where the decision of the Academic Council of Zaporizhzhia National University was approved on April 24, 2018 on the creation of the Educational and Scientific Center for Sport Law. And also, scientists talked about the appointment as the Head of the Center Associate Professor of the Civil Law Department ZNU – Maxim Tkalych.

The main tasks of the Center will be to conduct fundamental and applied research on topical issues of sports law; drafting laws and other regulatory acts and proposals for improving the current legislation; assistance in implementing the results of scientific research in the educational process of higher educational institutions of Ukraine and in the practical activities of a wide range of individuals and legal entities.

INTERNATIONAL DISTANT MEETING ON THE COVID-19 PANDEMIC
In the framework of the cooperation agreement between ZNU and Association of women-lawyers of Ukraine «Law firm», students of the Faculty of Law participated in webinar
ZNU's Professional Management and Entrepreneurship: Development Trends Continues Its Strategic Development
At the Faculty of Economics, the annual conference «Management of socio-economic development of regions and state» brought together online more than 100 scientists from different countries of the World.
Team of the Project ERASMUS+ KA2 DESTIN are trained in updating the study programs in journalism
© 2018 ЗНУ Запорізький національний університет, 69600,
м. Запоріжжя, вул. Жуковського, 66,
Відділ діловодства тел./факс +38 (061) 228-75-08
Приймальна комісія тел. (061) 228-75-38 та (061) 289-12-68
Офіційна пошта