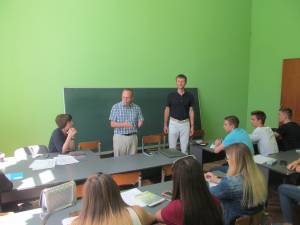 On May 15, Professor from the United Kingdom of Great Britain and Northern Ireland Kiron Reid hosted a lecture at the Faculty of Law of the ZNU. 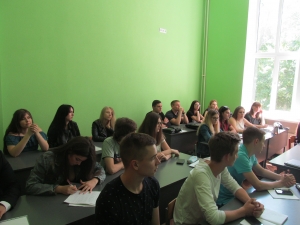 During the event, the speaker outlined a wide range of issues: from the legislative provision of anti-corruption to specific illustrations on examples of bribery of officials of public authorities. In particular, he cited the example of global corruption: the facts described in the mass media about the bribery of Saudi Arabia's leadership by the BAE Systems Aviation Company (the defense company of the United Kingdom) for supplying their aircraft to their market and building them at Alsalam Aircraft Company (a joint venture of the Boeing Corporation, Saudi Arabian Airways and Saudi Advanced Industries Company Saudi State Company).  He noted that the perception of corruption in the UK is traditionally more intolerant than in Ukraine.

The financial sector, especially banking, investment relations with the participation of transnational corporations and the political relations of central public authorities, remain the main branches of corruption. In particular, members of the British Parliament and Government regularly become participants in high-profile corruption scandals, being watched by the media and citizen associations. If the problems with corruption in the British police occur from time to time, among judges this phenomenon is eradicated.

Being one of the world's leading financial centers, Britain suffers from corruption challenges in this area more than others. After all, entrepreneurs with huge sums of money try to exert an unlawful influence on the decision of both financiers and top management of the country in solving investment issues in their favor. There is a situation where corruption is not multiplied by British people, but by citizens from other countries. At the legislative level, anti-corruption and anti-bribery laws have been adopted.

On the example of the medical industry, the participants of the event observed that high earnings, in particular British doctors (50-100 thousand British pounds a year), exclude corruption grounds, which is not followed now in Ukraine, where citizens give money to doctors to obtain better medical care or even get it as such.

That lecture became another event in the framework of the realization of the project on the definition of scientific and methodological substantiation of ensuring the efficiency and effectiveness of the implementation of the provisions of the Law of Ukraine "On Prevention of Corruption". 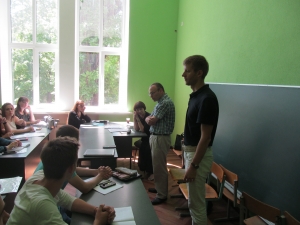 Representatives of the facultywere very grateful to the professor Kiron Reid for his cognitive lecture on the experience of combating corruption in the United Kingdom of Great Britain and Northern Ireland, solid arguments in the debate on minimizing corruption in Ukraine, as well as sincere answers to student questions and willingness to continue further fruitful cooperation with specialists of our faculty.

In the framework of the cooperation agreement between ZNU and Association of women-lawyers of Ukraine «Law firm», students of the Faculty of Law participated in webinar
Team of the Project ERASMUS+ KA2 DESTIN are trained in updating the study programs in journalism
Student of ZNU Taras Malchenko became the bronze medalist of the international tournament in Olympic taekwondo
International scientific and practical conference "Zaporizhzhia Legal Readings" was held in ZNU
Director of Confucius School Wu Shukhong spoke about Chinese culture with the students of the College of Economics and Law
© 2018 ЗНУ Запорізький національний університет, 69600,
м. Запоріжжя, вул. Жуковського, 66,
Відділ діловодства тел./факс +38 (061) 228-75-08
Приймальна комісія тел. (061) 228-75-38 та (061) 289-12-68
Офіційна пошта