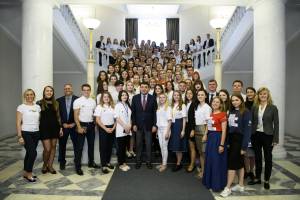 Oleg Pelipenko, a 4th year student at ZNU Faculty of Law, became a finalist of the All-Ukrainian Competition for Gifted Youth with an active civic position "The State Creator". Thanks to this competition, organized by the USID Foundation with the support of the Ministry of Youth and Sport of Ukraine and the Leadership Academy, 100 best participants from all regions of our country were given an opportunity to take internships in central executive bodies and listen to lectures from well-known politicians and public figures.

Under the terms of the competition, as a result of the three rounds of the competition, the organizers chose the 100 best participants aged 18-25 who are seeking to link their career with the civil service in the future.
According to Oleg Pelipenko, the 1st place in the 1st round was claimed by 8 people. They were supposed to fill out a special Google form, with their own professional skills, a list of social activities, plans for the future. Also, the contestants had to draft bills aimed at positive changes in key areas of life of Ukraine. So, Oleg proposed the creation of waste recycling enterprises in each regional center in order to improve the overall state of the environment and solve the problem of waste storage and recycling. 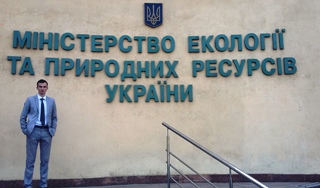 came to the 2nd round of the competition (the number of applicants for the 1st place was 6 people), had to take part in a Skype interview with the organizers of the competition. In particular, during the interview, they were asked not only about their own skills and professional competence, but also about how they see the future of Ukraine and what each of them is inclined to do, in order to realize the dream of a happy future of the country in life.
Oleg Pelipenko became one of the 100 best participants of the competition, who were invited to Kiev for internship. Within 10 days he was a trainee in the management of waste and ecological safety of the Department of Environmental Safety and licensing activities of the Ministry of Ecology and Natural Resources of Ukraine.
"I am sincerely grateful to the teachers of the Law Faculty of the ZNU and, in particular, its dean, Professor Tetyana Kolomoets, who not only was my supervisor during my studying period, but also provided us with all the necessary information on environmental law in the course of administrative law. The knowledge gained during the studies at the university was enough for me to receive an approval from the head of the practice in the Ministry" – Oleg said, speaking about his internship.
The finalists of the program also took part in the 3D Leadership Forum and visited the Corruption Park organized by Artem Sitnik in the National Botanic Garden. They also waited for the competition "What? Where? When? ", Dedicated to the theme of overcoming corruption. Incidentally, the team, which included Oleg Pelipenko, won, and its participants were awarded with books.
Also, on the last day of the internship, the participants of the "The State Creator" competition met with the Prime Minister of Ukraine Volodymyr Groysman and had the opportunity to communicate with him in the Government Hall of the Cabinet of Ministers of Ukraine.
According to Oleg Pelipenko, participation in the program not only allowed him to gain an important experience for a future career, but also made it possible to get acquainted with youth leaders from all over Ukraine. "I was finally convinced that our state has great potential not only raw materials, but also human beings. I'm sure that during the competition I talked with the youth leaders who will contribute to the development and prosperity of our country in the future," Oleg said.