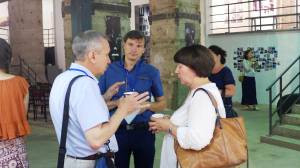 The supporters of this seminar were the department of historiography, source studies and archeology of V. N. Karazin Kharkiv National University, the Program by Kovalskih of Canadian Institute of Ukrainian Studies for graduates from the University of Alberta, and Association of professors and friends of KNU by V.N. Karazin.

The seminar had the multidisciplinary character and was divided into two parts. The first was held in Yermilov Centre of Karazin Kharkiv National University, where historians, social workers, linguists, architectures, and archivists from the scientific institutions of Zaporizhzhia, Budapest, Lviv, Dnipro, Odessa and Kharkiv took part in the discussion and made their speeches.

Serhii Bilivnenko, the associate professor of the source studies department and special historical disciplines of the Faculty of History in ZNU presented his report “Sources on the history of urban everyday life in the collections of the Manuscript Division of the Zaporizhzhia Branch of M. S. Hrushevsky Institute of Ukrainian Archaeography and Source Studies National Academy of Sciences of Ukraine”.

There was also organized a Skype conference with the scholars who were located in Budapest and Stambul.

There was a discussion during the second part of the conference of international scientific project “Practices of self-presentation of multinational city in industrial and postindustrial era”.

Serhii Posohov, the chairman of the organizing committee of the seminar pointed out the high level of preparation of the participants.

In the end, the participants of the seminar proposed to make the next step to realization of this project in Zaporizhzhia.

The Faculty of History invites to study under the new educational program "History and Politics"
The results of the implementation of the international project EUROPROC in ZNU were presented in the National Academy of Educational Sciences of Ukraine
Representatives of ZNU took part in the International Conference on the quality of higher education
Associate professors of the Faculty of Philology took part in an international conference dedicated to the works of the famous artist Viktor Petrov
Representatives of ZNU took part in the Ukrainian-Germane conference dedicated to climate adaptation
© 2018 ЗНУ Запорізький національний університет, 69600,
м. Запоріжжя, вул. Жуковського, 66,
Відділ діловодства тел./факс +38 (061) 228-75-08
Приймальна комісія тел. (061) 228-75-38 та (061) 289-12-68
Офіційна пошта