The rating lists of college entrants were announced today 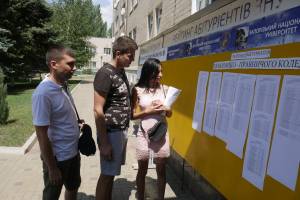 The rating list of enrollers in the College of Economics and Law (for the profession) you can find on the official web-site of the College and ZNU in the section “Admission campaign”, and on the banner near the second academic building.

Those who still did not choose the specialty or did not submit the original documents have to do it as quickly as possible as the deadline for budget form of education is 28 July till 12pm and for the contract one is the first August till 5pm.

The instruction of enrolling of the entrants who will be studying on the budget form of education will be announced on the web-site of the College 30 July at 6pm, and for the contract form is not later than the second August.

It should be remembered that submission of the documents from the enrollers who have general secondary education continues. They have an opportunity to apply for the second course on the contract form of education.

Representatives of CEL ZNU took part in cerebration of «World Earth Day»
College of Commerce of ZNU received more than 100 applications on the basis of 9 classes
Nearly 200 graduates of the College of Economics and Law were solemnly awarded with the certificates of associate degrees
Admission of documents from 9th grade graduates has begun in the Zaporizhzhia Metallurgical College of ZNU
Admission of documents has begun in Zaporizhzhia Hydropower College of ZNU
© 2018 ЗНУ Запорізький національний університет, 69600,
м. Запоріжжя, вул. Жуковського, 66,
Відділ діловодства тел./факс +38 (061) 228-75-08
Приймальна комісія тел. (061) 228-75-38 та (061) 289-12-68
Офіційна пошта