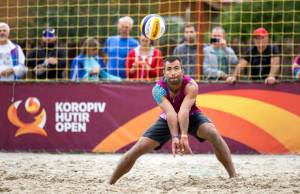 The final of Ukrainian Beach Volleyball Cup 2018 took place 29 July where the graduate of post-graduate study of the Faculty of Physical education Serhii Popov achieved the great results.

Drawing of Ukrainian Cup 218 was held within Koropiv Hutir Open-2018. The main opponents in this season have met in the final match such as Vladyslav Yemelianchyk/Serhii Popov and Oleksii Denin/Denys Denysenko. It should be mentioned that these athletes meet almost on every tournament in which t 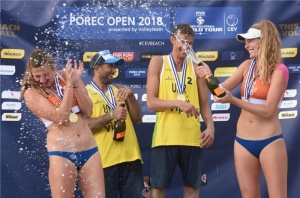 hey take part in. This time the stronger winners were of the recent Caravan Open-2018 and Satellit Porech - Yemelianchyk/Popov, they have won with the score 2-1 (15-21, 21-18, 15-9). The final matches were incredibly fascinating and intriguing. The fate of gold awards became clear during the tie-breaks.

What is more, the next stage of the prestigious international beach volleyball series “Satellite” took place in the Croatian city of Porec. Serhii Popov, the athlete of ZNU presented Ukraine men team in this competition, and was in pair with Vladyslav Yemelianchyk.

The athletes Serhii Popov and Vladyslav Yemelianchyk were firstly defeated by the athletes from Slovakia Pokersnik, D./Bozenk 1-2 (21-14, 19-21, 13-15). But then, they confidently won against athletes from Croatia Hanzic/ Igor 2-0 (21-9, 21-11) and after they took the third place, and that is why they could reach the playoffs. Here, their competitors were their compatriots as Denin/Denysenko. Popov/Yemelianchyk have got better results 2-0 (21-17, 21-15).

In the quarterfinals athletes from Zaporizhzhia won against Croatia pair such as Pribanic/Silic 2-0 (21-15, 21-15). In order to reach the final, Serhii Popov and Vladyslav Yemelianchyk were playing with experienced Latvians athletes as Smits/Samoilovs and in the end they could become the winners 2-0 (21-16, 21-16).

The final confrontation became a real present for tournament. There were two sets where athletes from Zaporizhzhia were playing with the Austrians ones Wutzl/ Fruhbauer S., where they won alternately, and that is why the winners were chosen only during the tie-breaks. The intrigue atmosphere has lasted to the final moment and in the end our athletes could achieve the victory – 2-1 (21-19, 1721, 21-19).

It should be pointed out that Sergei Popov will be present on the next stage of the prestigious international beach volleyball series “Satellite” which is going to take place in August in the city of Ljubljana (Slovenia), and also during one of the stages of the Ukrainian beach volleyball championship in Zaporizhzhia.