According to the words of Vice-rector Hennadii Vasylchuk, the participants of Summer school got quite a lot of professional skills 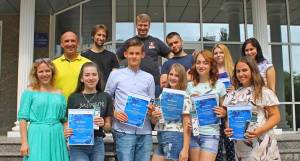 “Summer school of bloggers and public journalists” has been held in ZNU recently. Hennadii Vasylchuk has told about the results of it and mentioned that there was an active participation in the project from Oleksandr Holovko, and Svitlany Zapolskykh who are the associate professors of the department of theory and practice in translating from English, and also other workers of the university.

Hennadii Vasylchuk pointed out that journalist, philologists, lawyers, historians, and therapists gathered together in order to obtain new knowledge in media literacy and get interesting and relevant professional skills. 24 participants have visited “Summer school of bloggers and public journalists” from Zaporizhzhia, and also from the Kherson, Kharkov, Dnipro, Donetsk, Odessa, and Nikolayev regions.

The official opening of the Summer school has been held 21 July on the base of Zaporizhzhia national university.  Among t 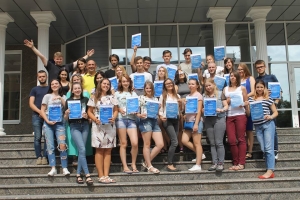 The coaches of this school were the famous journalists such as Artem Babak, Volodymyr Torbich, and Dmytro Bondar. They have shared with their secrets of professional success, and have made quite interesting master-classes.

The vice-rector for scientific work, Hennadii Vasylchuk added that within 9 days, the listeners could deep their knowledge in public journalistic, discovered the specific of blogging, developed the critical thinking, listened to the stories of social responsibility of journalists and about the meaning of mass-media in forming the civil society, created their own media projects. Furthermore, they had an opportunity with experts and also have visited the TV and radio station UA: Zaporizhzhia.

29 July, Vice-rector Hennadii Vasylchuk congratulated the participants with successful conclusion of the learning in School. He mentioned that after deep studying the projects of the participants, he was incredibly excited by their professional level of work. Hennadii Mykolaiovych also pointed out that he hopes that people who took part in this project not only improved their knowledge, but also found new friends and likeminded persons, and planned new projects for realization in future. He awarded the certificates for skills development for all the participants of the trainings and noted that ZNU pays attention to forming media literacy of different categories of population, and also promotes the realization of projects which support social initiatives of youth.