ukr eng
Official site
Zaporizhzhya National University
University Submission Studying Science International
relations Student ?
ZNU Press Centre News / News / ZNU is an absolute leader of the region owing to the web presence and one of the first in Ukraine in the Webometrics Ranking 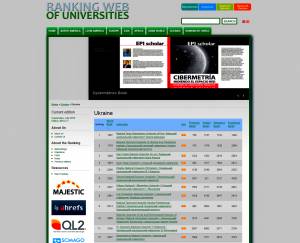 Webometrics Ranking of World’s Universities published summer ranking of worldwide universities by the rate of their web presence. Zaporizhzhia national university is among Ukrainian universities which got to this list and took the 12 position. In comparison with 2017 year, ZNU was on the 14 position in the same ranking, and in 2016 year ZNU took only 31 place in the winter ranking (at the beginning of the year), and 22 position in the summer one. In the winter ranking of 2015 year ZNU was on the 31 position.

The number of indexed pages of web-sites of educational institutions by searching systems, external links, citation of the resources, and also the number of downloaded files on the website is taken into account during the making of this ranking list. So, the richness and informative components of website of the university are estimated.

It is known that the results of the researches of Webometrics are published twice a year (in January and in July). The new Ranking Web of Universities was made with the accounting of systematized data.

The source of information: http://www.webometrics.info/en/Europe/Ukraine