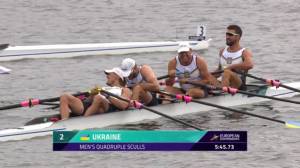 Within the Quadruple Sculls together with Sergii Gryn, Dmytro Mikhay, Ivan Dovgodko, Olexandr Nadtoka was third in his ride (05:53.160). So, Ukrainian Quadruple happened to be in consolation ride, where it got the second place with the result 05:45.730. Owing to such result, Ukrainian team could get into the final  of European championship.

It should be remembered that during education period in Zaporizhzhia national university, Olexandr Nadtoka got a few major winnings on international and global rates. By the way, his coach and mentor is the head of the physical education department and sport, the associate professor Andrii Svatiev.