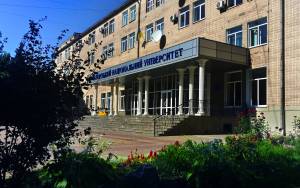 Zaporizhzhia national university is included in the list of the best higher educational institutions of Ukraine, which were granted open access to the world-renowned scientific platform Web of Science since October 13 2017 year to September 30, 2018 year according to the order of the Ministry of Education and Science of Ukraine dated September 19, 2013, No. 1286.

According to the statistic, scholars of ZNU carried out 2994 user session and 6157 search queries for the work with resources and services of the platform Web of Science for the period of 01.08.2018.

Under the terms of the contract, service providers Elsevir (Scopus) and Clarivate Anaytics (Web of Science) systematized the profiles of Ukrainian universities in the databases which allowed them to increase their ratings and visibility on the world scientific map. The work on the selection of data for the compilation of the profile of the Zaporizhzhia national university in the Scopus and Web of Science databases was carried out under the direction of the pro-rector for scientific work, Hennadii Vasylchuk, the director of the scientific library, Nina Chala and the head of the research department Viktoriia Miniailo.

On the eve of the new academic year, our university demonstrated once again its enormous scientific potential; on August 24 2018, the number of publications in the Web of Science Core Collection along in the profile of Zaporizhzhia national university reached 400 publications.

It is pleasant to point out that in 2018 year the publications  of our scholars appeared in the international scientometric database of the Web of Science: Tetiana Kolomoiets from the legal sciences; Alla Cherep – economic sciences; Nataliia Shevchenko, Yevhenii Klopota from the psychological sciences; Viktoriia Miniailo with pedagogical sciences; Milchev Volodymyr- historical sciences; Prykhodko Hanna from the philological sciences, Andrii Svatiev, Symonik Anastasiia from the physical education and sports, etc.

If you want to order training for scientific and pedagogical workers and students or receive individual consultation you can visit the hall of the electronic resources of the scientific library (second academic building, auditory 126).

Electronic system of scientific publications was created in order to systematize and monitor the activity of publications of the Zaporizhzhia national university which is located in the section “SCIENCE” on the website of ZNU. For today, there are 911 publications.

We invite scientists of ZNU to replenish the base in time with their published works!

The scientific library - for freshmen
The results of the implementation of the international project EUROPROC in ZNU were presented in the National Academy of Educational Sciences of Ukraine
Representatives of ZNU took part in the International Conference on the quality of higher education
Scientific Library of ZNU invites everyone to use their electronic catalog
Zaporizhzhia National University has access to Scopus and the Web of Science
© 2018 ЗНУ Запорізький національний університет, 69600,
м. Запоріжжя, вул. Жуковського, 66,
Відділ діловодства тел./факс +38 (061) 228-75-08
Приймальна комісія тел. (061) 228-75-38 та (061) 289-12-68
Офіційна пошта