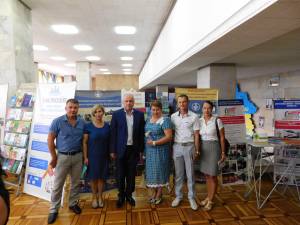 The representatives of ZNU in the head of the rector of ZNU, Professor Mykola Frolov and vice-rector Oleksandr Hura took part in the region’s events which were held 28 August in Zaporizhzhia Regional State Administration. For example, achievements in the field of teacher education presented the dean of the Faculty of Social Pedagogy and Psychology, Olha Ponomarenko, scholars Andrii Andrieiev and Nataliia Tykhonska  (“Secondary education (Physics)” ), deputy director of the Scientific Library, Oksana Ahoian. The principal of College of Economics and Law Olena Hrybanova, joined the discussion of important issues in the development of areas of I-II level of accreditation.

According to the Department of Information and Public Relations on the eve of the new academic year, the traditional expanded meeting of the August conference of teachers of the Zaporizhzhia region took place.

Kostiantyn Bryl congratulated the presents with upcoming Day of Knowledge and turned to the professors of the region with such words: “Zaporizhzhia region is still one of the leaders in system of education. Two the most important directions for our region are education and medicine.

The chairman of the regional state, Kostiantyn Bryl handed awards to the pedagogical workers of the Zaporizhzhia region including the teacher of the Ukrainian language and literature of the State Educational Institution “Mykhailivske Higher Professional School” Tetiana Sarabash, the director of the State Educational Institution “Zaporizhzhia Machine Building Higher professional School” Oleksandr Oliinyk.

The participants of the conference considered the results of the work of such branch as “Education” in Zaporizhzhia region in 2017/2018 educational year and priority tasks for 2018/2019 educational year in conditions of implementation of new Ukrainian school.

Director of the Department of Education and science of the regional state administration Tetiana Ozerova reported about the results of the work of the system of education for the last year and the main tasks in developing the conditions of availability of the qualified education in the region.

The official also paid a lot of attention to the question of the implementation of the concept such as “New Ukrainian School”. According to the order of the Ministry of Education and Science of Ukraine and with the support of the Poroshenko’s Charitable Foundation, a scientific and pedagogical experiment “Development of an inclusive educational environment in the Zaporizhzhia region” has been carried out since July 2016, which resulted in 35 inclusive groups in the 2017/2018 academic year, 27 institutions of preschool education, 25 classes in 121 general education institutions of secondary education.

The details of the participation of the scholars of ZNU in these events will be published in the further materials of the press office ZNU.