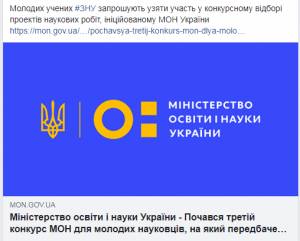 According to the words of the rector of ZNU, Mykola Frolov, the development of young science, and support of young scholars are among the priority activities of Zaporizhzhia national university. One of the way of attracting the scholars to the all-Ukrainian academic circle is encouraging their participation in scientific competition as the winner will have plenty of perspectives.

That is why the scholars of ZNU are invited to take part in the competitive selection of projects of scientific works and scientific and technical (experimental) developments of the young scholars which is initiated by the Ministry of Education and Science of Ukraine.

This corresponding order which was signed by the rector, Mykola Frolov is available on the website by the link: http://web.znu.edu.ua/NIS//2018/pro_provedennya_pershogo_etapu_konkursnogo_vidboru_proektiv_naukovikh_robit_ta_naukovo-tekhnichnikh--1---1-.pdf

According to this document, the first stage of the competitive selection of scientific works and scientific and technical (experimental) developments of young scholars will take place in the university by September 20, 2018 year at the expense of the general fund of the state budget. The list of thematic branches of the competition can be found by the link above.

In order to participate in the selection you need to register in the informative system “Science in the University”: https://kis.rit.org.ua/user/redister

In the future, t is necessary to inform the research staff about this and carry out the design of the work in the system “Science in the university” in accordance with the criteria which are placed in Annex 2 to the Regulations of the competition.

It is necessary to follow the calculations carried out jointly with the deputy head of the research department Olha Deriuhina while forming the volume of financing (fourth academic building, auditory 324), and add a letter of support from the representatives of the leading scientific community, investors or the real sector of economy to the project.

It is necessary to submit printed in two copies the project from the system “Science in the university”, and a letter of recommendation to the auditory 324 until September 15. The names of those participants in the selection, whose projects will be represented by ZNU at the all-Ukrainian level, will be announced on September 20.

More detailed information on participation in the competitive selection can be obtained by visiting the research department (Dniprovska str., 33a, fourth academic building, auditory 324), or by phone: 228-75-62.

The first stage of the All-Ukrainian Student Olympiad on the specialty “Banking” was held in ZNU
Students of Engineering Institute and the Metallurgical College of ZNU took part in the 1st stage of the All-Ukrainian Student Olympiad in Metallurgy
The winners of the post-graduate students competition in the framework of the international program EUROPROC were determined in Zaporizhzhia National University
Students of the Faculty of Metallurgy of the Engineering Institute took part in the II round of the All-Ukrainian competition of student research papers
Representatives of the student scientific society of ZNU took the second place in the intellectual competition
© 2018 ЗНУ Запорізький національний університет, 69600,
м. Запоріжжя, вул. Жуковського, 66,
Відділ діловодства тел./факс +38 (061) 228-75-08
Приймальна комісія тел. (061) 228-75-38 та (061) 289-12-68
Офіційна пошта