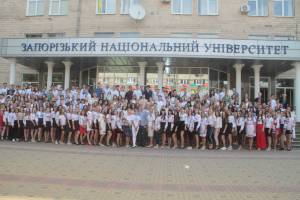 College of Economics and Law greeted with a formal cremenoy its freshmen and their parents on August 30. Initiation into the students is vitally important event for those who could overcome the entrant examinations, and made their dream to become a student of the college come true. In this year, 300 new students have joined our friendly university family; they are the students of the college who in a few years as a tradition will become the students of ZNU. 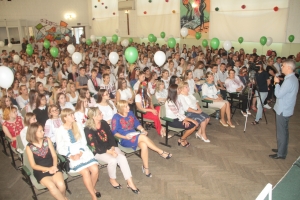 The first vice-rector Oleksandr Bondar made a gratitude speech to the college’s team and congratulated the entrants. During the speech, the principal of the college Olena Hrybanova, professors, students and the graduates were speaking about the college’s achievements during the last 10 years.

There was also a battle among the specialties during this event in order to demonstrate the opportunities of every 10 specialties which supply the preparation for junior specialists. It was accompanied with sandy animation, presentation of the specialties, and achievements of the graduates of the college.

The climax moment of this event was the oath of the freshmen which was said by the best graduates and student of the College of Economics and Law. They also pass 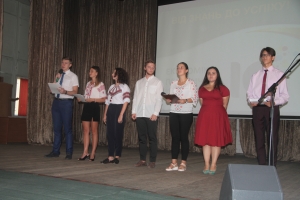 ed to the new students the old tradition of the college as from now the freshmen will also should care about the good name of the College of Economics and Law, its intellectual, art, and culture potential, respect each other, parents, and their professors, and work  for the benefit of their family and motherland.

There was also an anthem of the college in the end of the meeting which was performed by the professor of Ukrainian language Anna Hrushanska.

After finishing the ceremony part, the representatives of every 10 specialties with their curators went to the auditory, and the principal of the college Olena Hrybanova gave the answers to the questions of the parents.

Representatives of CEL ZNU took part in cerebration of «World Earth Day»
Day of Knowledge in ZNU gathered first-year students of all courses and colleges
Nearly 200 graduates of the College of Economics and Law were solemnly awarded with the certificates of associate degrees
Ceremonial presentation of diplomas took place in the Zaporizhzhia Metallurgical College of ZNU
Selection Board of the College of Economics and Law has begun its work
© 2018 ЗНУ Запорізький національний університет, 69600,
м. Запоріжжя, вул. Жуковського, 66,
Відділ діловодства тел./факс +38 (061) 228-75-08
Приймальна комісія тел. (061) 228-75-38 та (061) 289-12-68
Офіційна пошта