Day of Knowledge in ZNU was celebrated by opening the modernized multi-media studios, convocation ceremony, and alley of umbrellas (photo gallery) 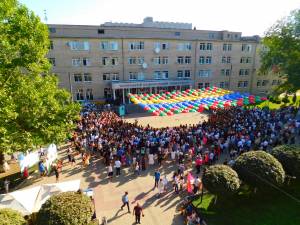 Day of knowledge in ZNU brought tons of surprises and unforgettable emotions. Mykola Frolov, rector of ZNU, and honored guests such as deputy Chairman of Zaporizhzhia Regional State Administration, Zinaida Boiko, and head of the district administration of Zaporizhzhia City Council for Alexandrovsky District Valerii Mostovyi gave a congratulation speech to all the presents of the event, especially to the freshmen during the official part of ceremony.

Rector of ZNU mentioned that there were made the best conditions in the university for the students; there were rebuild academic building, better streamlined the territory of campus, bought new equipment, and updated logistics.

10 audiences with multimedia equipment, and 5 with displays which will help to modernize the educational process were opened by the new educational year in ZNU.

Mykola Frolov invited the freshmen to the big and friendly university familywhich consists from 12.5 thousands of students, 500 graduate students and doctoral candidates, and also about thousands of workers, among whom are 93 full professors, and 513 associate professors. There also made conditions for science work, international internship, studying of foreign languages, volunteer work and etc. Moreover it is planned to build a stadium to promote the developing of sport life in university.

Chairman of the Student Council Mariia Peresypko congratulated the first-year students after ending the anthem of Ukraine and Zaporizhzhia national university. She said that ZNU is not only their place of education, but also their future. After that, Viktoriia Lahutina and Kostiantyn Velmozhko pronounced the words of an oath of freshmen, and the chorus of the center of culture performed for first-year students the famous anthem of all the times «Gaudeamus» after finishing the ceremony.

There was also a flash-mob “Vyshyvanka is your genetic code”. That is why, every freshmen who wore vyshyvanka got notebooks with ZNU logo, pens and pencils as presents.

One of the highlights of the event was festive opening of the alley of umbrellas which was prepared by the representatives of the center of culture. 220 umbrellas created multicolor art zone. By the way, it is going to be open about 2 months. Also, a new photo zone became the enormous student ticket where all who wanted could take pictures with it.

After finishing the festive program, the freshmen could get acquainted with faculties and campus, also there were prepared some excursions for them.

Photo and video reports of the event were prepared by Anton Osadchuk and Illia Hordieiev. In some time, these photos can be found on different social platforms of the center of culture.

Department of Heat and Hydro Power Engineering of ZNU Engineering Institute received a unique training stand ‘Ventilated façade’
The office is equipping for the carrying out the International Language Exam of the level HSK at the School of Confucius at the Zaporizhia State National University
The scientific library - for freshmen
The project of students of ZNU is a participant of the program “Public Budget” and needs your support
Students of ZNU Kyrylo Pyrohov and Kostiantyn Reva are silver medalists in the international weightlifting championship «Cup of blue swords»
© 2018 ЗНУ Запорізький національний університет, 69600,
м. Запоріжжя, вул. Жуковського, 66,
Відділ діловодства тел./факс +38 (061) 228-75-08
Приймальна комісія тел. (061) 228-75-38 та (061) 289-12-68
Офіційна пошта