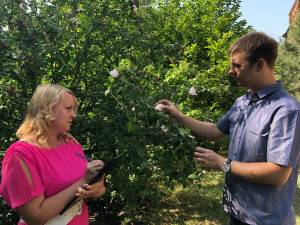 Plenty of attention is paid to project activities and successful implementation of grant programs on the Biological Faculty of Zaporizhzhia national university. So, until today ZNU continues to work on the implementation of the received grant within the framework of the social project "We are a city", which was won this summer.

It should be remembered that the Zaporizhzhia national university proposed to implement in our city the project "Familiar Strangers" (No. 117 in the list of competitive work-social initiatives "We are a city").  It provides the establishment of panels with QR-codes near the trees which grow in the territory of Zaporizhzhia national university; some of them are quite rare and were imported from other continents.

There are will be given 20 000 UAH in order to implement this project which was promoted by director of the project activities department, vice-dean of the Faculty of Biology in international work, senior professor of the forest management department and genetics Olena Boika; the certificate of this amount of money has already been received by representatives of the university.

The first step was the inventory and species identification of plants on the campus of ZNU.

Now we are selecting information for encoding it in the form of QR codes, which will be placed next to the trees and bushes for acquaintance with the guests and residents of our city.

As a result, it is planned to install 50 panels with QR-codes next to the unique trees in the campus this September.  It should be pointed out that each panel will have a separate QR-code from two sides: one - Ukrainian version, another – English one (translation of the text will be made also by Olena Boika, as she has not only professional biological education, but also Master’s degree in Foreign Language).  If you want to find information about the unique tree you should scan the corresponding QR-code from the panel by using the typical QR-reader which can be downloaded in your phone and in a few seconds you will get the needed, affordable and interesting information.

ZNU reported on the implementation of the MultiEd project during National Erasmus+ Office preventive monitoring
“Summer School of Young Journalists” successfully completed its work in ZNU
The results of the implementation of the international project EUROPROC in ZNU were presented in the National Academy of Educational Sciences of Ukraine
The results of international project EUROPROC: the second year of implementation were summed up at ZNU
Scholars of ZNU within the framework of the EUROPROC project are expanding cooperation with Ukrainian universities
© 2018 ЗНУ Запорізький національний університет, 69600,
м. Запоріжжя, вул. Жуковського, 66,
Відділ діловодства тел./факс +38 (061) 228-75-08
Приймальна комісія тел. (061) 228-75-38 та (061) 289-12-68
Офіційна пошта