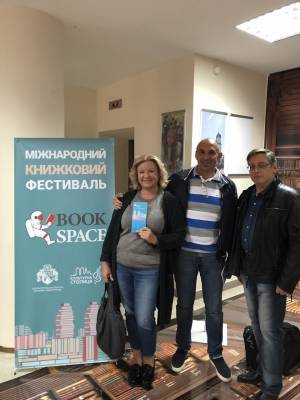 Scientists of Zaporizhzhia national university took part in the International Book Festival Book Space 2018, which this year was held for the first time in the city of Dnipro in the framework of the program of Borys Filatov "Cultural Capital". 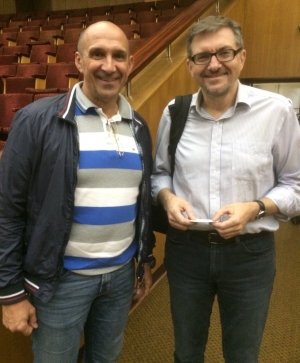 In particular, the vice-rector for scientific work, Hennadii Vasylchuk, took part in the presentation of the Ukrainian and American historian, professor of Ukrainian history in Harvard University, Serhii Plokhii who graduated from Oles Honchar Dnipro national university. Hennadii Mykolaiovych mentioned that  Serhii Plokhii is engaged in research of the early and modern history of Ukraine and Eastern Europe as well as the political and cultural history of the Cold War.  That is why such communication with a foreign colleague is of the great importance for Ukrainian historians.

In addition, there was a scientific competition on historical topics within the framework of the book festival. Professors of the Faculty of History such as the dean of the Faculty of History, professor of the Department of Source Studies, Historiography and Special Historical Disciplines Volodymyr Milchev and professor of the Department of World History and International Relations Oleksandr Davlietov worthily presented the university.  The representatives of the jury left positive feedback about their scientific research.

It should be mentioned that during the festival, visitors had the opportunity to talk with writers, journalists and historians, in particular, from the USA, Germany, France, Poland and Denmark.  The main feature of the festival was that the program included not only literary, but also social discussions.  The main theme of Book Space 2018 was chosen by different manifestations of transformations.

The main locations of the festival were located near the regional administration. They include Mediaprostir, book fair pavilions, children's area.  Visitors of the event had the opportunity to meet with well-known authors, such as Irena Karpa, Oksana Zabuzhko and others.

Keep in mind that, Zaporizhzhia Book Toloka will be held in Zaporizhzhia for the fourth time on October 26-28.  There are a lot of professors, work staff, students and graduates of ZNU among the participants, volunteers and visitors of this festival.