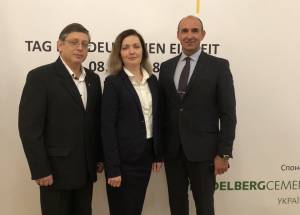 ZNU pays a lot of attention to the development of the German vector of international activities.  Among the guests of the university are representatives of the Consulate of Germany in our country who are interested in establishing fruitful cooperation with Zaporizhzhia national university. That is why the administration of the university did not remain aloof from the celebration of the Day of German Unity, which recently has took place in the city of Dnipro. Zaporizhzhia national university was represented at the event by vice-rector for scientific work, Hennadii Vasylchuk.

The organizer of large-scale celebrations on the occasion of an important day for German citizens was the Consulate General of the Federal Republic of Germany in Donetsk, which is temporarily located in Dnipro. The event was visited by the representatives of the consulate and the German embassy in Ukraine, the leadership of the city of Dnipro and the Dnipropetrovsk region, public figures and professors from Dnipropetrovsk and Zaporizhzhia regions.

Consul General of Germany Wolfgang Messinger and Extraordinary and Plenipotentiary Ambassador of the Federal Republic of Germany in Ukraine Ppan Ernst Wolfgang Reichel congratulated all the present during the opening ceremony. They expressed confidence that there will continue fruitful cooperation between our countries in the future.

After the completion of the official part, vice-rector Hennadii Vasylchuk congr 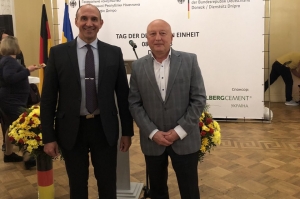 atulated Wolfgang Messinger, who for many years successfully cooperates with Zaporizhzhia national university.  In addition, Mr. Messinger expressed his sincere gratitude to the representative of the university administration for his help in organizing the exhibition "“Germany - the country of inventors: module'' Research'”, which takes place in the Zaporizhzhia Regional Museum.

Furthermore, Hennadii Mykolaiovych met with university graduates - Director of the All-Ukrainian Holocaust Study Center "Tkuma" (Dnipro) Ihor Shchupak and Professor of the Berdyansk State Pedagogical University, Viktoriia Konstantynova during the celebration of the Day of German Unity.  During the conversation, there was discussed the joint scientific educational projects, which the representatives of the universities and research institutions will be able to implement together.

Team of the Project ERASMUS+ KA2 DESTIN are trained in updating the study programs in journalism
The scientific library - for freshmen
The project of students of ZNU is a participant of the program “Public Budget” and needs your support
Students of ZNU Kyrylo Pyrohov and Kostiantyn Reva are silver medalists in the international weightlifting championship «Cup of blue swords»
Take the opportunity to become a student this year! ZNU conducts additional set for all educational levels and specialties
© 2018 ЗНУ Запорізький національний університет, 69600,
м. Запоріжжя, вул. Жуковського, 66,
Відділ діловодства тел./факс +38 (061) 228-75-08
Приймальна комісія тел. (061) 228-75-38 та (061) 289-12-68
Офіційна пошта