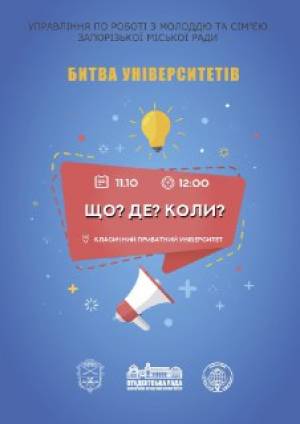 The new season of the city project “Battle of the Universities” continues in Zaporizhzhia.  He passes the second year in a row.  Students of six Zaporizhzhia universities such as ZNU and the Engineering Academy, Medical University, Classical Private, Zaporizhzhia national technical university, Zaporizhzhia Institute of Economics and Information Technologies take part in it. 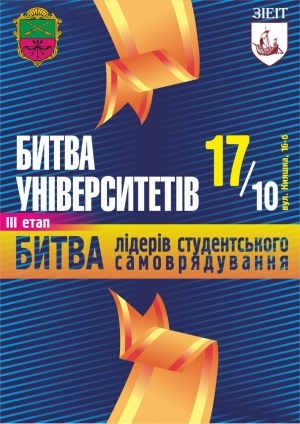 And on the seventeenth of October, the main activists of our university Puchkov Arsen, Fiedosieiev Kostiantyn and Sydorenko Anastasiia won the silver battle of the leaders of student self-government.

It should be reminded that, the students of Zaporizhzhia universities played volleyball in the Medical university on the third of October; and this is the first stage of the “Battle of the Universities” project. The game was attended by more than 70 students, united in 6 teams.  Each university of Zaporizhzhia delegated its best players to the team.

- “The Battle of Universities” is a large-scale urban project for young people. Its main goal is to rally students from different universities, to show how active Zaporizhzhia youth are. This project is for students to communicate, so that they effectively spend their free time during the competition during the competition. Each university will be the host, be able to show themselves, show how their inner life look like.  We have planned excursions to universities, - says Oleksii Savytskyi.

The project of students of ZNU is a participant of the program “Public Budget” and needs your support
Representatives of the student council are preparing creative and useful cleaning days in the biological station of ZNU
The participants of ZNU Lecture center examined the topic “Euroreality”
Participants of the conference the students have made changes to the provisions "About student's self-government"
In ZNU was held elections of the Students' Council Head of the 4th hostel
© 2018 ЗНУ Запорізький національний університет, 69600,
м. Запоріжжя, вул. Жуковського, 66,
Відділ діловодства тел./факс +38 (061) 228-75-08
Приймальна комісія тел. (061) 228-75-38 та (061) 289-12-68
Офіційна пошта