Traditionally, students of the Faculty of Journalism presented their talents on a large scale during a social advertising competition 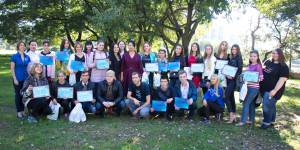 An award ceremony was held at the Youth Center for the participants of the IV regional competition of social advertising “You choose” on October 11.  It should be mentioned, that the competition is concentrated on developing the creativity of the contestants, moral education and promotion of a healthy lifestyle, promoting volunteering, forming a conscious and caring attitude to society and the environment.  The initiator and leader of student work was Tetiana Ivanets, associate professor at the Department of Theory of Communication, Advertising and Public Relations. 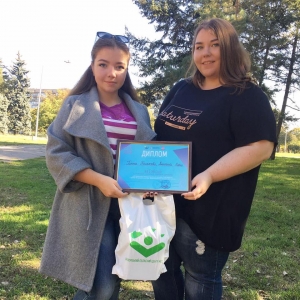 Valeria Glushchenko comments: “It was not the first time when we took part in such events, but we still were nervous.  But, after hearing the words: “And now we will start awarding the winners” - we were delighted, looked at each other and happily went to receive our awards and gifts.  After all, in addition to diplomas, we received a T-shirt, a cup and a notebook”.

Anna Yatskiv notes: “The award was very interesting, especially watching the videos of the winners.  The audience was struck by the work of students of the medical university "Against abortion without a medical indication."  However, all the other videos also left no one indifferent and made us think about important things such as the promotion of a healthy lifestyle, the popularization of volunteering, the formation of respect for the environment”.

“The incredible emotions that we received are beyond words.  Looking through the works of the winners, we were pleasantly surprised by their idea and performance skill.  “You choose” is a wonderful project for caring people who want to change this world,”- Olena Politova and Antonina Sieryshcheva accentuate with delight.

“When we learned about the “You choose ”competition, we immediately decided to participate, because this is a great opportunity to unleash your creative potential.  While discussing ideas, we argued, but as it is known, truth is born in a dispute.  We were very worried waiting for the results of the competition.  The news that we received first place in the nomination "Social outdoor advertising" was unexpected, but very pleasant for us.  It is impossible to describe the feelings when you worry during the award ceremony and finally hear your name as a winner.  After all, for the second year in a row we occupy the first places in social advertising competitions.  We are grateful to the organizers of the contest for their indifference to socially important topics and for supporting young talents in the field of social advertising, because the combination of these two components allows us to change our world for the better,” - said Anastasiia Lobko and Hanna Tolkachova.