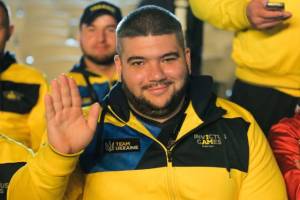 Graduate student of 2 years of study on the Faculty of Economics in ZNU Yevhen Oleksenko took part in the Invictus Games-2018 in Sydney, where he worthly represented our country.  In the powerlifting category, Yevhen won a silver medal.

It should be remembered, that the Invictus Games-2018 are international Paralympic sports competitions.  The games involved wounded soldiers.  The first Games of the unconquered took place in 2014 in London.  Ukraine firstly received the right to take part in the 2017 Invictus Games in Toronto.

Graduate School of Economics Yevhen Oleksenko is veteran of the volunteer battalion "Karpatska Sich".  In 2014, he went to the front, and in 2015, during a hard fight, Yevhen closed a comrade with his body and received extremely bad wounds to the back and legs.  After seven months of treatment, the fighter learned to walk again.  And today he is getting an education in economics and is actively involved in sports.

The team of Zaporizhzhia national university is proud of Yevhen Oleksenko and wishes him further success in education and sports.

The student of Faculty of Foreign Philology – Tatiana Nosanenko is among the winners of the all-Ukrainian competition of student scientific works in Romance languages
Students of the Faculty of Economics and Management of the ZNU Engineering Institute are among the ten finalists of the Student Case Championship «M. Student Champ» by «Metinvest» Company
The student of Faculty of Foreign Philology Daria Yurchenko got a 3rd degree diploma of the All-Ukrainian competition for student scientific works in German Languages
At the Faculty of Economics, the annual conference «Management of socio-economic development of regions and state» brought together online more than 100 scientists from different countries of the World.
The student of philological faculty Oleksandr Smyrnov - the winner of the All-Ukrainian competition of student scientific works on the Ukrainian language and literature
© 2018 ЗНУ Запорізький національний університет, 69600,
м. Запоріжжя, вул. Жуковського, 66,
Відділ діловодства тел./факс +38 (061) 228-75-08
Приймальна комісія тел. (061) 228-75-38 та (061) 289-12-68
Офіційна пошта