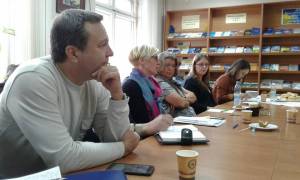 Participants of the Ukrainian-German program “U-LEAD with Europe”, aimed at developing the self-government system in Ukraine, empowering at the local level, summed up the weekly visit of representatives of Viadrina European University to Zaporizhzhia (Frankfurt-Oder, Germany) on October 25, in ZNU.

Before that, within framework of cooperation with the German university in the summer, representatives from the Faculty of Sociology and Management of ZNU attended an internship. They studied the methods of conducting studies of foreign colleagues, the use of tutoring and the like.  And now the German scientists have demonstrated their achievements in innovative techniques and student self-government. 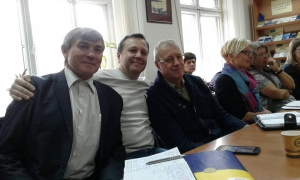 It should be mentioned that the professors, staff and students of the German institution of higher education, took part in the opening ceremony of the hall of European projects in ZNU on the first day of the visit, October 22.

They attended the training “Popularization of social work among students” (moderator - Volodymyr Hlazunov), master classes “Experience in introducing project teaching methods in Faculty of Sociology and Administrating” (moderator - Taras Butchenko) and “Pathologies of state  management decisions "(from Yuliia Yatsyn) on the first day of work, October 23.

In addition, we visited with the scientific library of ZNU.  The guests of the university were greatly impressed by the book fund of rare and unique publications, equipped with a mini-grant from the British Council, in the co-working zone.  They were also interested in the art-zone of the library, where the artwork of students of the biological faculty (specialty "landscape gardening farm").  The guests also liked the permanent exhibition of German-language publicatio 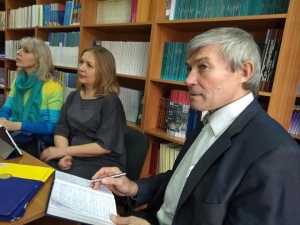 ns, organized by the library staff in honor of the Year of the German Language, which is now coming to Ukraine.

On October 24, the participants of the internship took part in the workshops “Mediation in difficult situations and intercultural communications” (moderated by Maksym Lepskyi) and “Fakes in the media” (moderated by Kateryna Sirinok-Dolharova) and in the training course “Resource Recreation” (by Ihor Kapritsyn).

Representatives of the German side shared their impressions of participation in the events, noted that they liked it and assured that they plan to use some of the interactive methods of their Zaporizhzhia colleagues during classes in their university.

An interesting way to summarize impressions and to share them with others was the method of “posters”: posters were distributed during the event, which included questions in German and Ukrainian languages.  They had to give an answer by writing first impressions and associations, with which all those present later became acquainted.

At the end of the event, representatives of the Viadrina European University thanked the Ukrainian scientists for their hospitality.