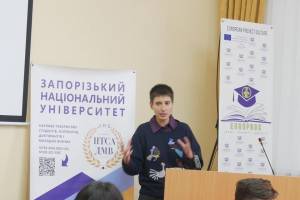 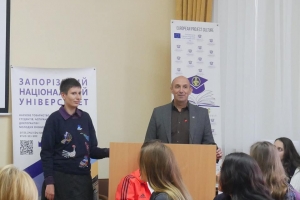 At the beginning of the event, which took place in the newly opened Hall of European Studios, vice-rector for scientific work Hennadii Vasylchuk introduced the honorary guest of the university to those present. He noted that the work of an open lecture center begins with a lecture by Yaroslava Strikha, the speakers of the lecture will be talented and interesting personalities who contribute to the development of modern Ukraine.  He also mentioned the merits of the father of Mrs. Yaroslava who is the Deputy Minister, the famous translator Maksym Strikha, who will visit the university with a lecture on October 26.

The organizer of the event, professor Nataliia Torkut, introducing the guest, noted that Yaroslava Strikha is the author of more than 20 translations of artistic, historical and literary works. Her translation work won prestigious awards.

At the beginning of the lecture, Mrs. Yaroslava mentioned that in the era of “postpost-modernism” there is the concept of “unity of plurality”, which describeы the current state of culture. She also said that she has the hope that after the completion of the lecture, each participant will be able to draw his own conclusion regarding the proposed topic. 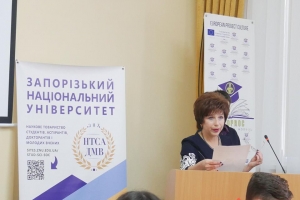 Thus, during her speech, they talked about the concept of “literary canon” and its changes throughout the twentieth and early twenty-first centuries, and the reasons that influenced this.

In addition, the lecturer recalled such important concepts for understanding the modern literary process as “peripheral identities” and “eccentric experiments”.  Owing to them, there is an expansion of the classical literary canon.

On the works of specific representatives of "literature, over which the sun never sets" (English-language literature), Yaroslava Strikha considered the main trends of modern literature.  In addition, she highlighted the role of prestigious literary awards as the creators of the modern literary canon and at the same time marketing tools.

At the end of the event, the lecturer answered the questions of those present at the event.

In addition, Nataliia Torkut thanked the guest for the informative rich meeting.  She also invited those present to join the numerous events of the Zaporizhzhia book fair, which will be held October 26-28.