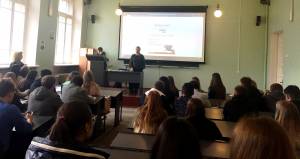 3rd year students of the College of Economics and Law of ZNU was visited by representatives of "Anex Tour" and were told about internship opportunities in Turkey on October 31. It should be noted that the Director of the College Olena Hrybanova focuses on the students ' adaptation in the labor market, and therefore pays special attention to the bases of production practices. So, for the third consecutive year the College has partnered with travel company "Anex Tour", led by the Director of the southern region Nataliia Velychko.

In the beginning of the meeting Nataliia said that an internship abroad is a chance to test themselves, to determine the calling in life. Anyone under the age of 18 years can sign a contract and start to work officially in Turkey, the transfer guide from a company that is a leader in the tourism market.
Students learned about the necessary documents, details of prior learning the nuances of interviews, during which will be screened candidates. They talked about the norms of the working day and wages. Subsequently, the word was given to the 4th year student of the specialty “Tourism” Aishen Hakhramanov, she had just returned from training in Turkey. The girl shared with her experience of internship in Turkey, drew attention to issues that should have been used for productive work. At the end of the event all students were invited to participate in this program and try their hands during the internship in another country.

The scientific library - for freshmen
Scientific Library of ZNU invites everyone to use their electronic catalog
Mrs. Alisa Kanuni completed the internship on the Faculty of Foreign Philology
ZNU joined the modernization of educational programs in journalism of the project DESTIN Erasmus+
Representatives of the Faculty of Economics invite you to study in the educational program "Environmental Economics"
© 2018 ЗНУ Запорізький національний університет, 69600,
м. Запоріжжя, вул. Жуковського, 66,
Відділ діловодства тел./факс +38 (061) 228-75-08
Приймальна комісія тел. +380661803608, +380953068022, +380973559513
Офіційна пошта