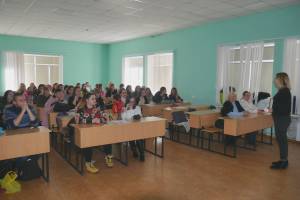 Creative evenings dedicated to outstanding cultural events have long become a good tradition on the Faculty of foreign philology. That is why the 3rd year students of the specialties “English Language and Literature” and “Spanish Language and Literature” under the guidance of associate professor of the Department of German Philology and Translation Yana Kravchenko turned the last lecture on foreign literature in this semester into a real literary holiday. 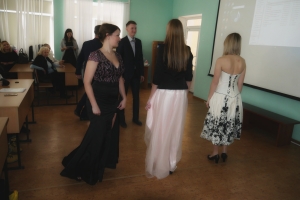 They decided to celebrate at once two important dates for all connoisseurs of world literature such as 205 years from the day of the first publication of Jane Austen's outstanding novel “Pride and Prejudice”; and also -the 200th anniversary of the famous English writer of the Victorian era, Emilia Brontë, the author of the “Wuthering Heights”.

Not only the faculty students, but also the deputy dean for educational work, associate professor Nina Zakharova and associate professor of the department of German philology and translation Valentyna Botner, who will conduct foreign literature classes in the next semester, were invited to the solemn event.

In addition to the theatrical production, the students showed the audience several more videos, recreating the love story of the main characters of the novel, as well as the writer herself in the scenery of the academic buildings of Zaporizhzhia National University.

This gave them the opportunity to include in their story shots from the well-known screen versions of the novel from different years, to look at some scenes with irony, and some to convey touching and romantic. 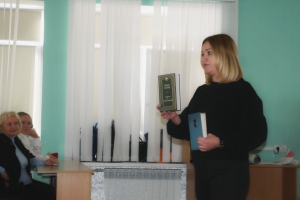 The students of the specialty “Spanish language and literature” Diana Heniukh, Valeriia Esperova, Anzhelika Ananaskovych, Yuliia Serebriakova, Yevheniia Popova, Anna Chepurna made a presentation of the life and career of Emilia Bronte and her novel “Wuthering Heights “ quite thoroughly.

They brought interesting and little-known facts from the biography of the writer.  They also spoke about the secrets of writing and interpreting the work, which, according to the rating compiled by the British TV channel UKTV Drama, became the best romantic book of all the time and in the list of the 200 best books by the BBC version (2003) it took 12th place.

At the end of the lesson, associate professor Yana Kravchenko thanked the participants and rewarded them with Jane Austen's books.

Moroever, associate professor Valentyna Botner highly appreciated the students' creative approach to the study of literature, empathy for its heroes and the interpretation of well-known subjects.